My son, Seth, died from suicide when he was 21 years old.

I had noticed a difference in Seth two years earlier. He began to show signs of paranoia and compulsivity, spending all his time in his bedroom, isolated from family. I read about symptoms of mental illness and asked Seth if any of them sounded familiar. He told me all of them, but he was adamant he would not seek help or take medication.

On a routine visit to his doctor, Seth asked for a psychological evaluation and was referred to a psychiatrist at the community mental health center eight weeks later. But Seth was afraid and would not go. He asked me, "If you get admitted to the hospital, can you ever leave?"

Seth's symptoms interfered with his job. I arranged a cunsultation with a psychiatrist a the hospital. Seth agreed, but the day of the appointment he changed his mind and did not go. A week later, Seth lost his job.

During this time, the severity of his hallucinations, his compulsive behaviors, and suspicions about my intentions increased. He agreed again to see a psychiatrist, but the earliest appointment would be in six weeks.

One week before the appointment, on November 15, 2012, Seth took his life.

This is the moment it happened, the actual moment Seth took his life.

The first time I came into the Art Studio, I knew I had to paint this. I was shaking and crying as I did it because it put me in touch with the reality of his death. When Seth took his life, I was numb. I had been frozen in pain for so long, unable to do anything.

All that poured out as I painted this picture, all the rolling emotions inside me that were like a tangled ball of yarn. Maybe thread-by-thread, they could come out in pictures. 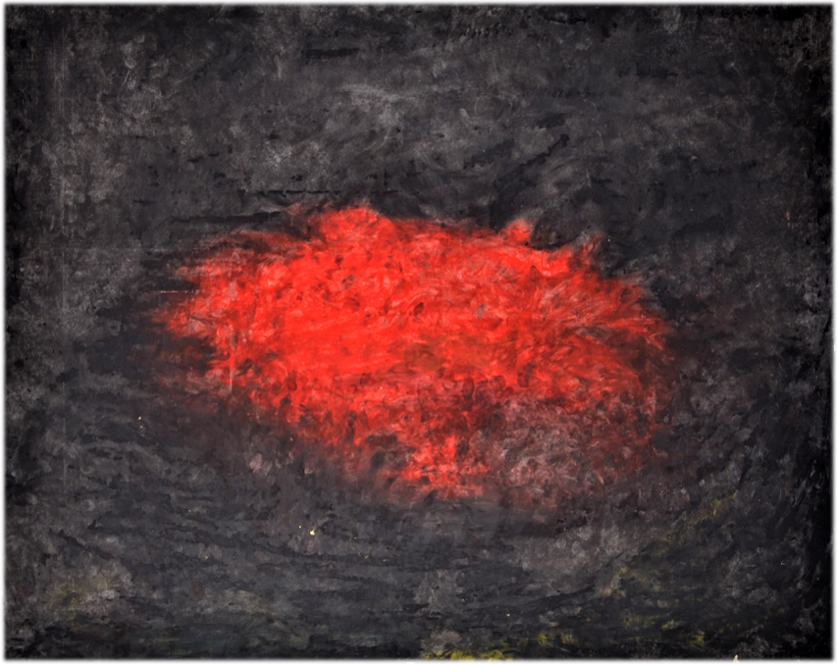 How can I live with all these explosions of grief?

They came from the sorrow of his death, the sorrow of missing him. But they also came from remembering the torment I saw on his face, even on his body, while he was yet alive to his illness. The grief was confusing. I couldn’t just say, “I wish I had Seth back,” because he had lost himself.

I cried in grocery stores, tears running down my face. I cried while driving down the road, or at work, and when I laid my head on the pillow. 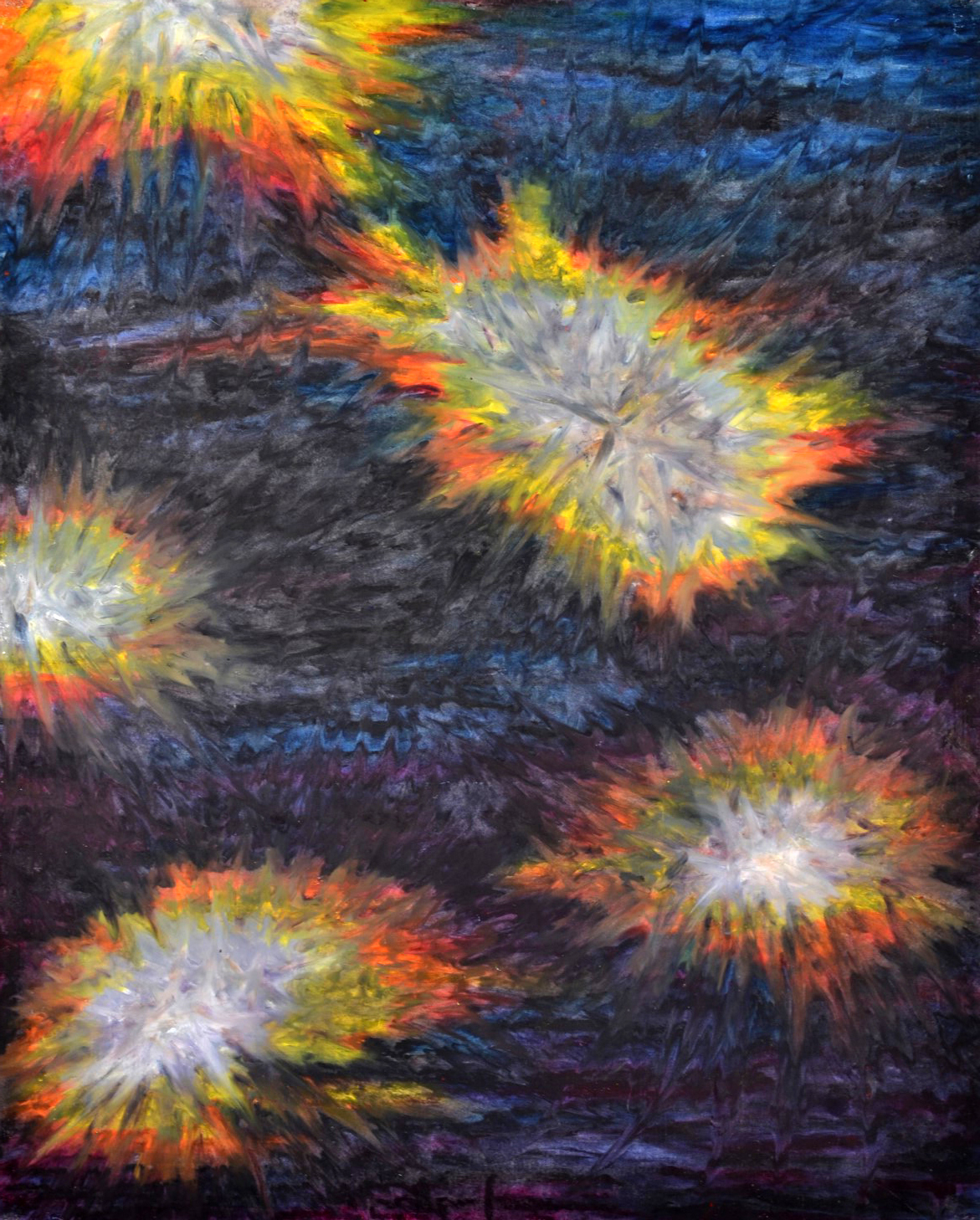 I came to the Studio aware of how everything in my life had blown away.

I painted a yellow background and then a tree. I stepped back from it and saw it was static. It needed to move.

With my hands, I pressed into the tree, pushing the paint across the surface of the paper, smearing the tree, wiping it out.

I cried as I began, but now I sobbed as the movement connected me to my feelings of rage, this hurricane wind coming into my life, devastating me, shredding my foundation, my faith, my life. I am the tree. 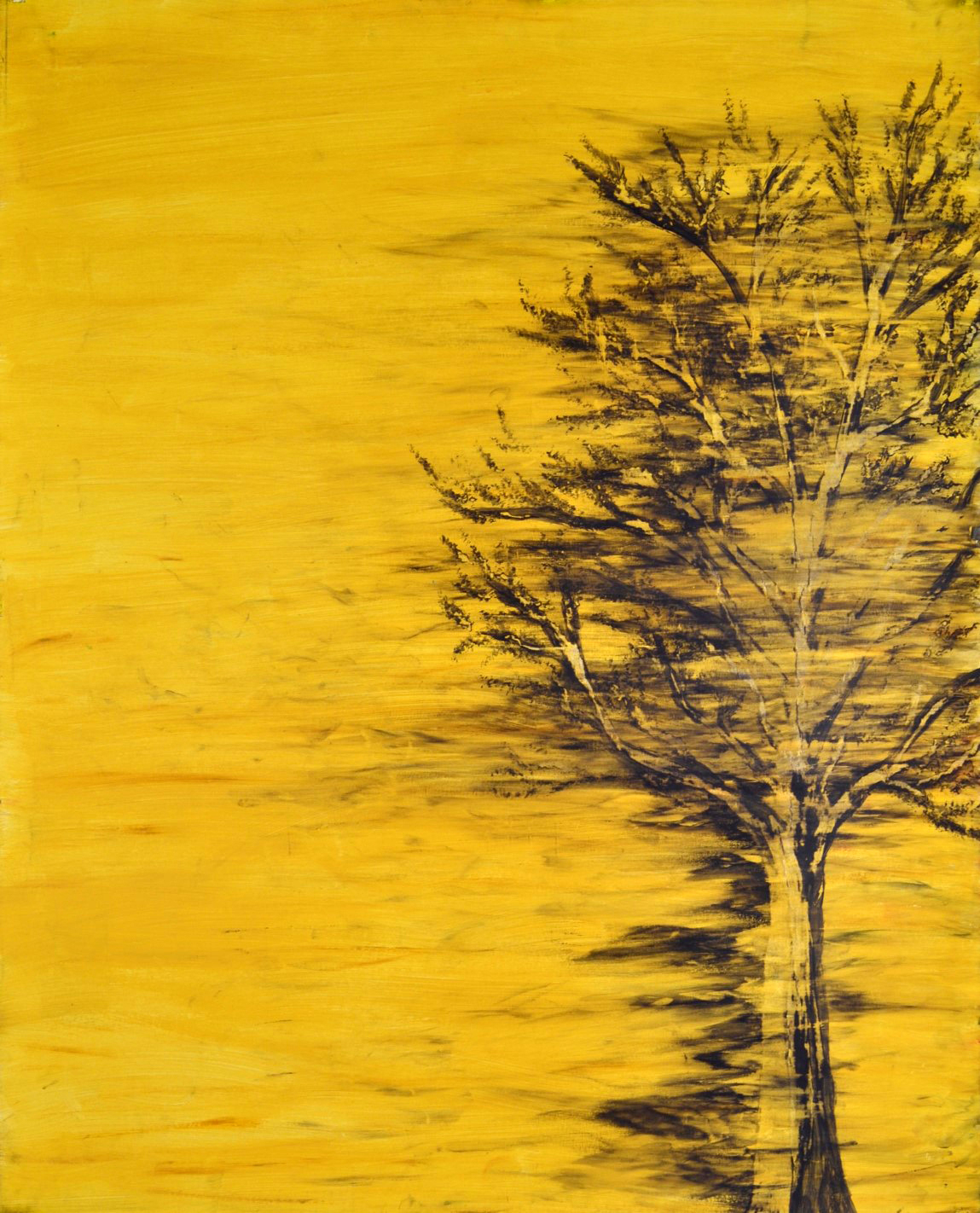 Seth told me his dream of chaotic water roiling and rushing and crashing, and overflowing because he couldn’t hold back the madness in his mind anymore. It couldn’t be stopped. 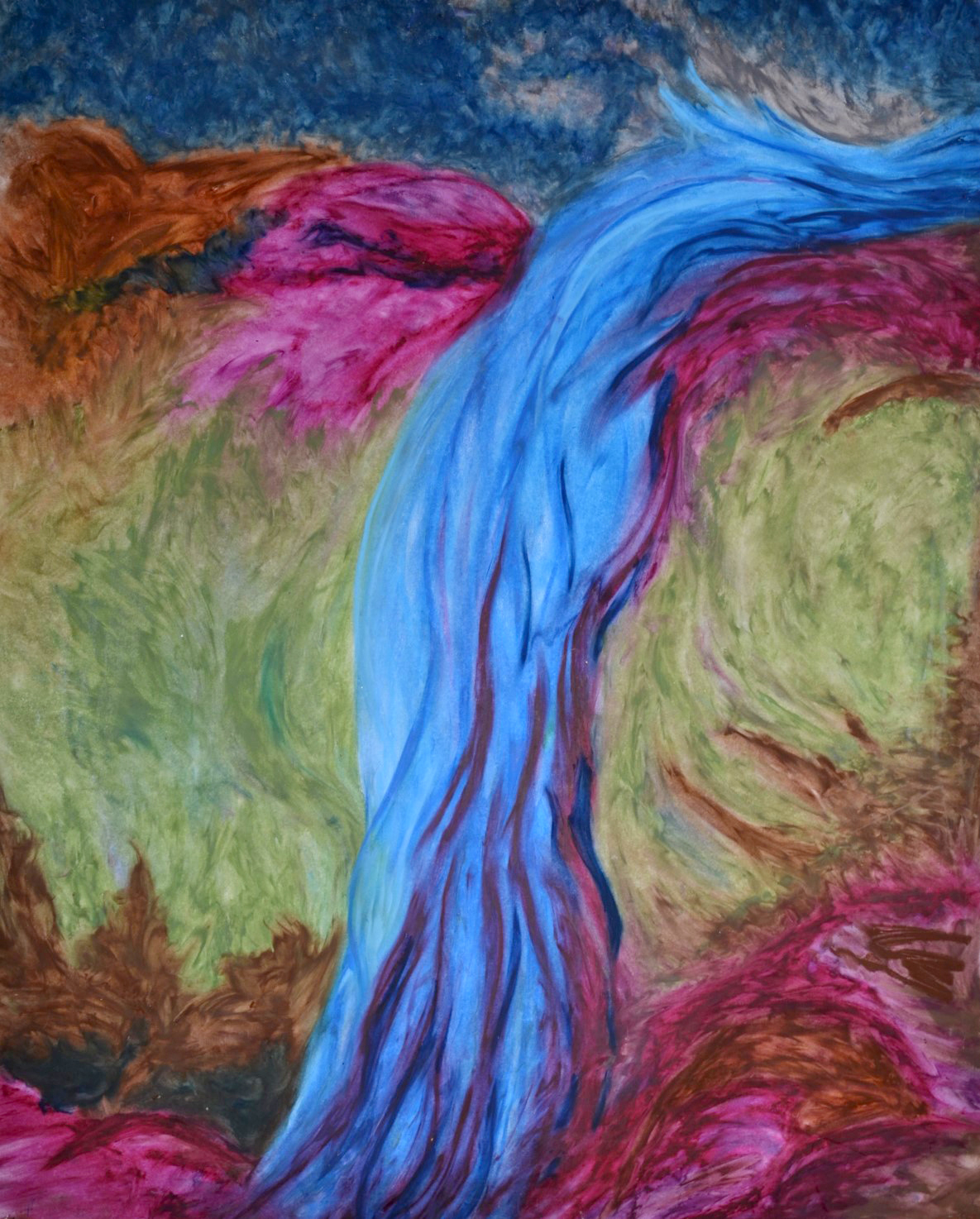 This was the hardest picture for me to do, because it portrays Seth. 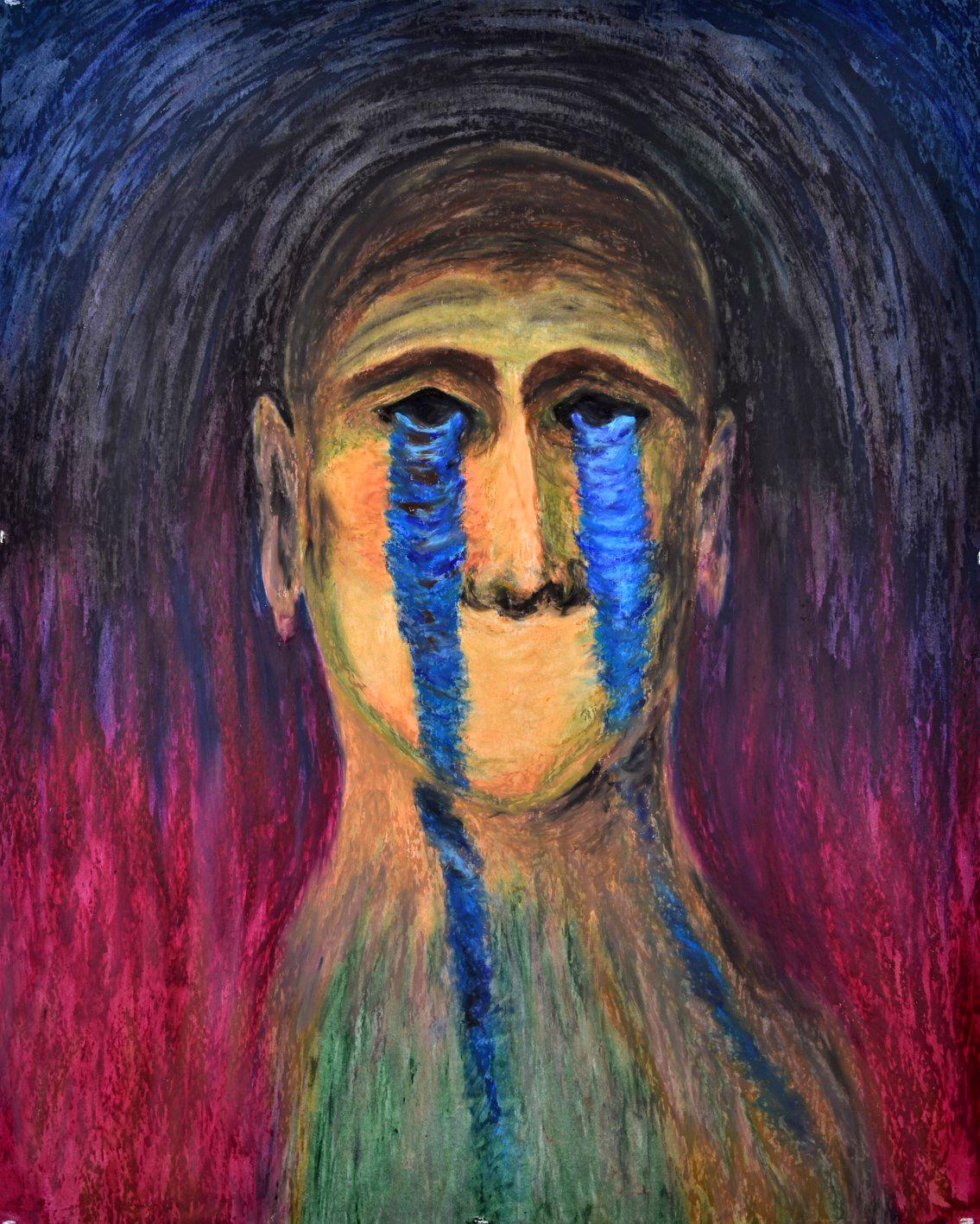 I’m blindfolded. I walk with him through the mental illness as it gets worse and worse.

Oh my God, how are we going to get out of this? How do we help him?

Will he let us help him? 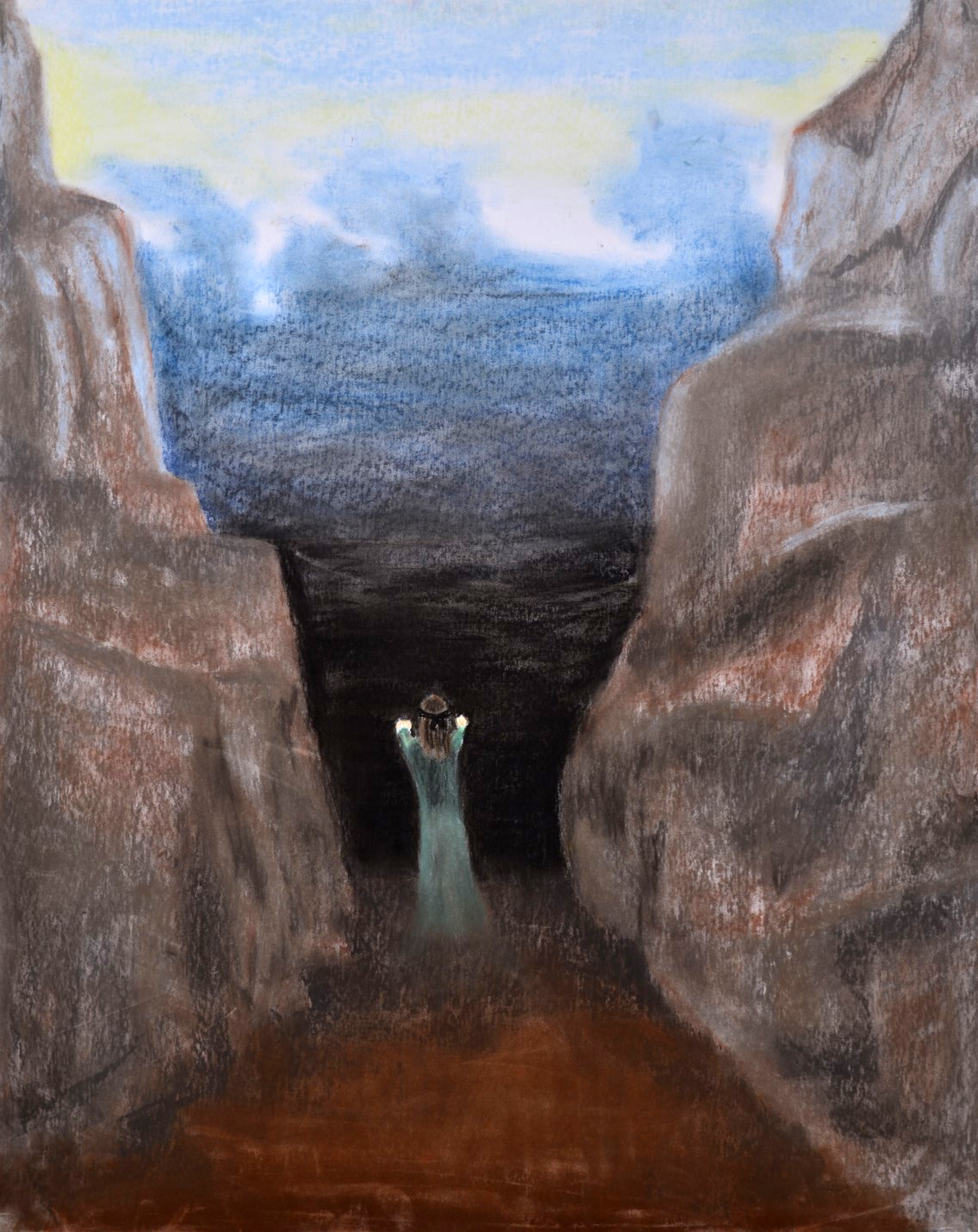 Seth and I couldn’t see each other anymore. He couldn’t see me because of the distortion of his mental illness. Once he calmly told me he thought I was a witch.

That’s what got confusing for me. I never knew when he was seeing me that way, or when he was more or less okay. As I look back now, I think there were times where I could have talked to him, but I didn’t know that. Sometimes when I talked to him, it would go great at first, but then he would switch. Whatever that is, the mental illness, it would come in and then he would switch it, and he’d be against me.

This picture portrays how we couldn’t see each other but how we reached up through our rings of pain, barely touching. 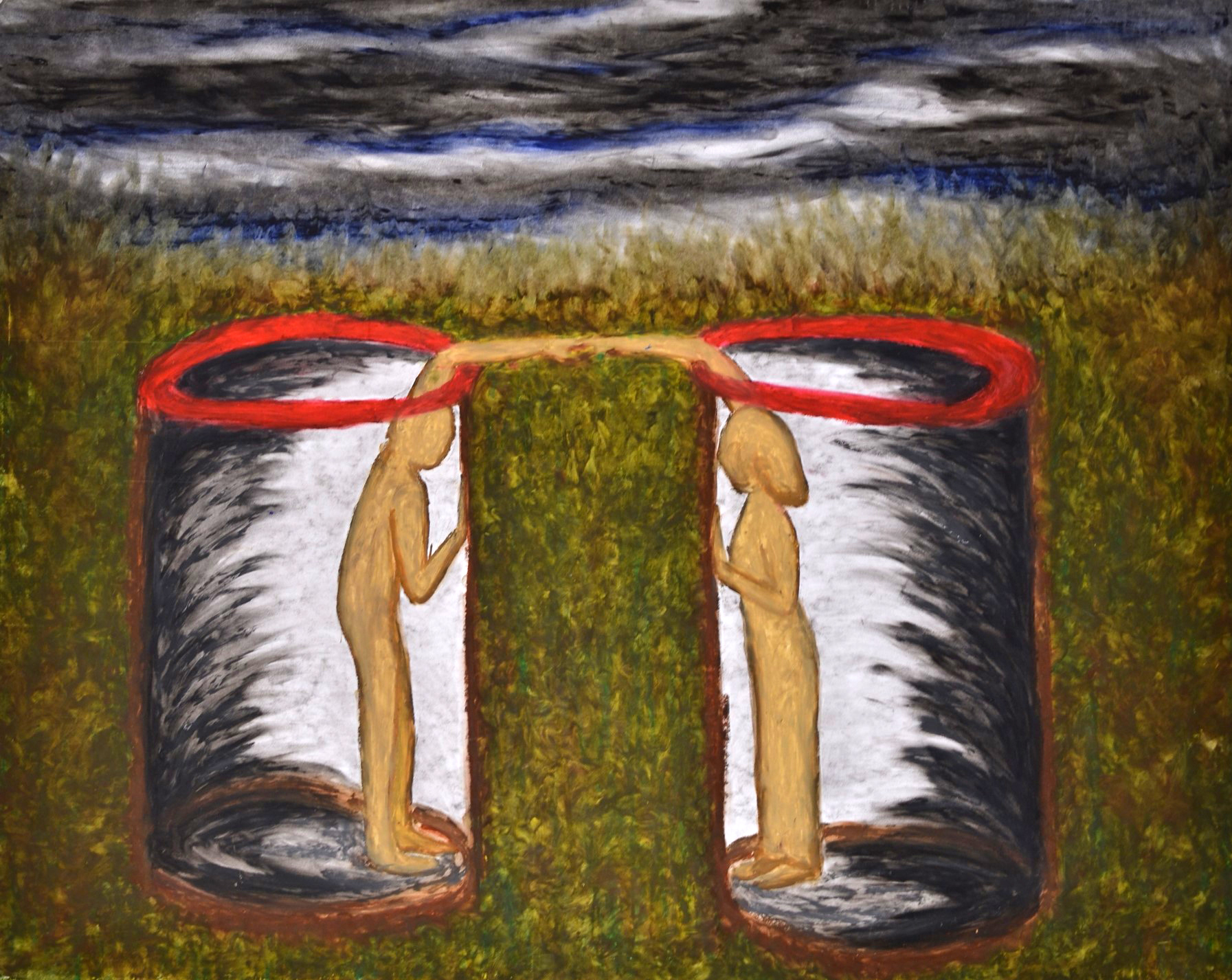 This is the last time Seth asked me to give him a hug. I got up, came over, knelt by him and hugged him. I felt fearful, but I was glad he asked me.

I cried when he said that‘s all I need. I wish that was all he needed. I wish I had held onto him more. 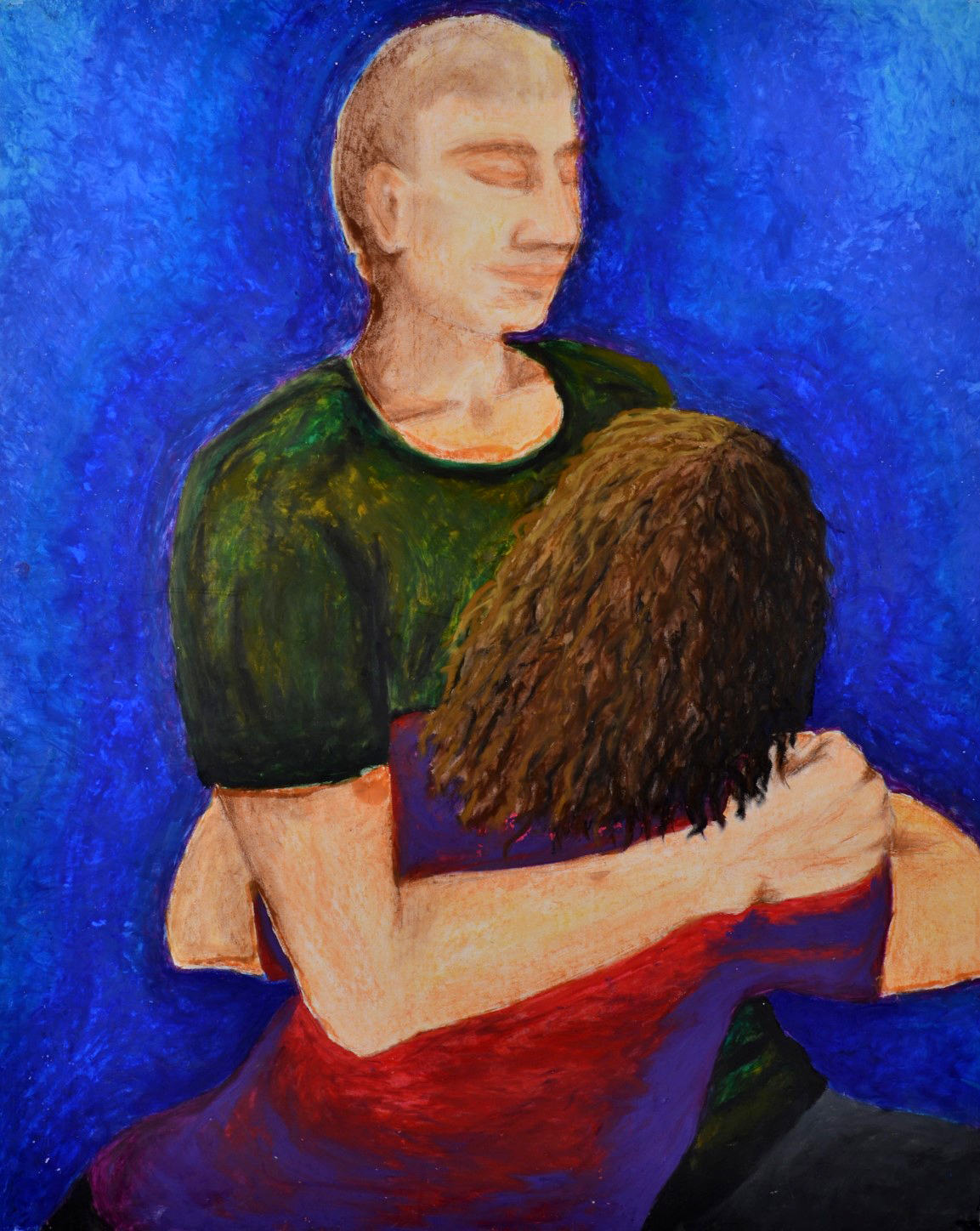 "I feel like a soldier, blood stains on my mind.
Some are his, some are mine.
We were fighting in a war, just the invisible kind.
But make no mistake; it was drawing blood all the time.
Fights behind us, fights in front of us. We stood till the end,
but the end wasn’t kind."

Everything I tried seemed not to work. I didn’t know what to believe anymore. I lost faith. I lost hope. Weary and exhausted, I’m fighting to keep him here with me in this world. 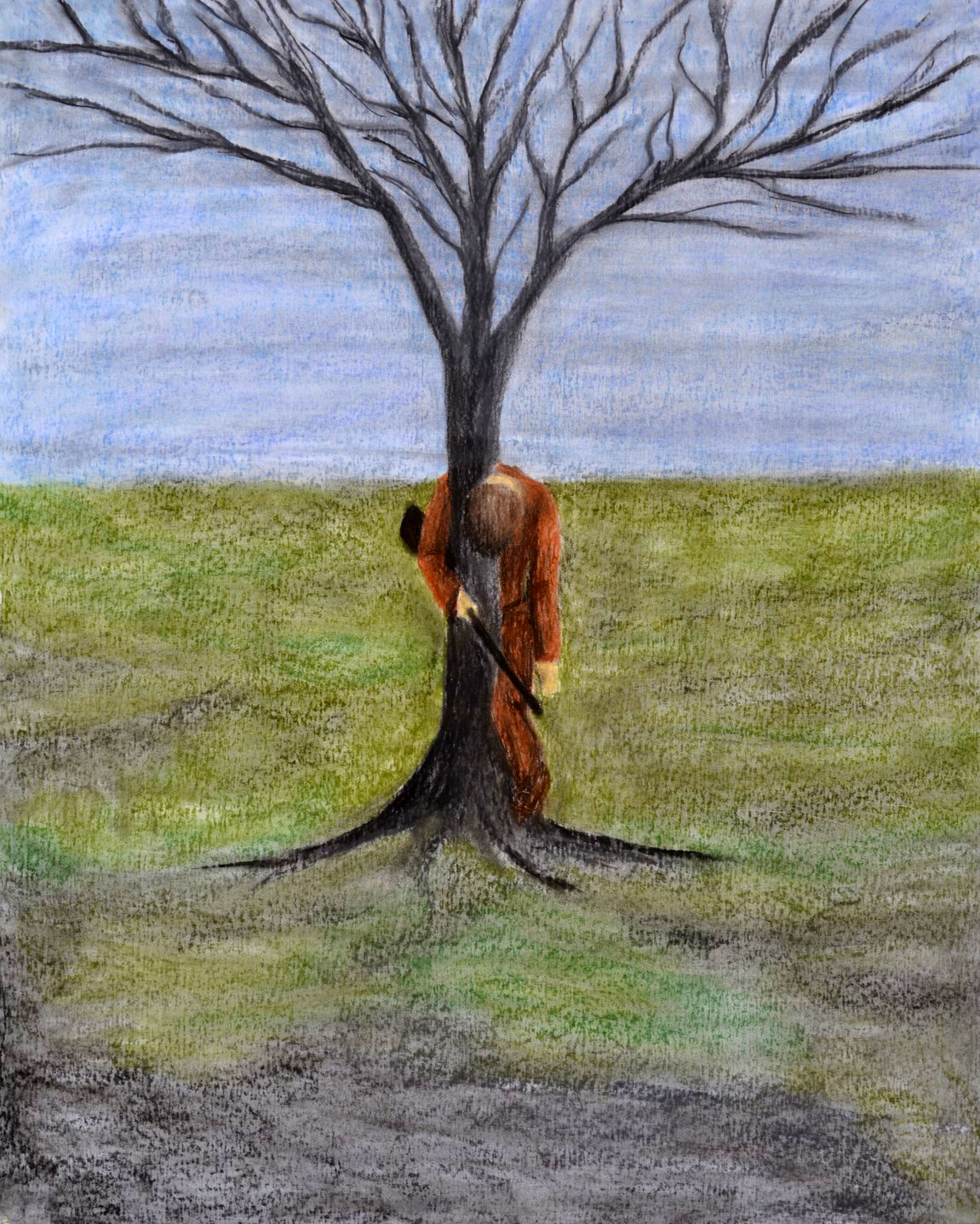 I came to the Art Studio knowing exactly how I felt—chained to the pain of losing my son. It’s unending. Seth is gone. I can’t save him. 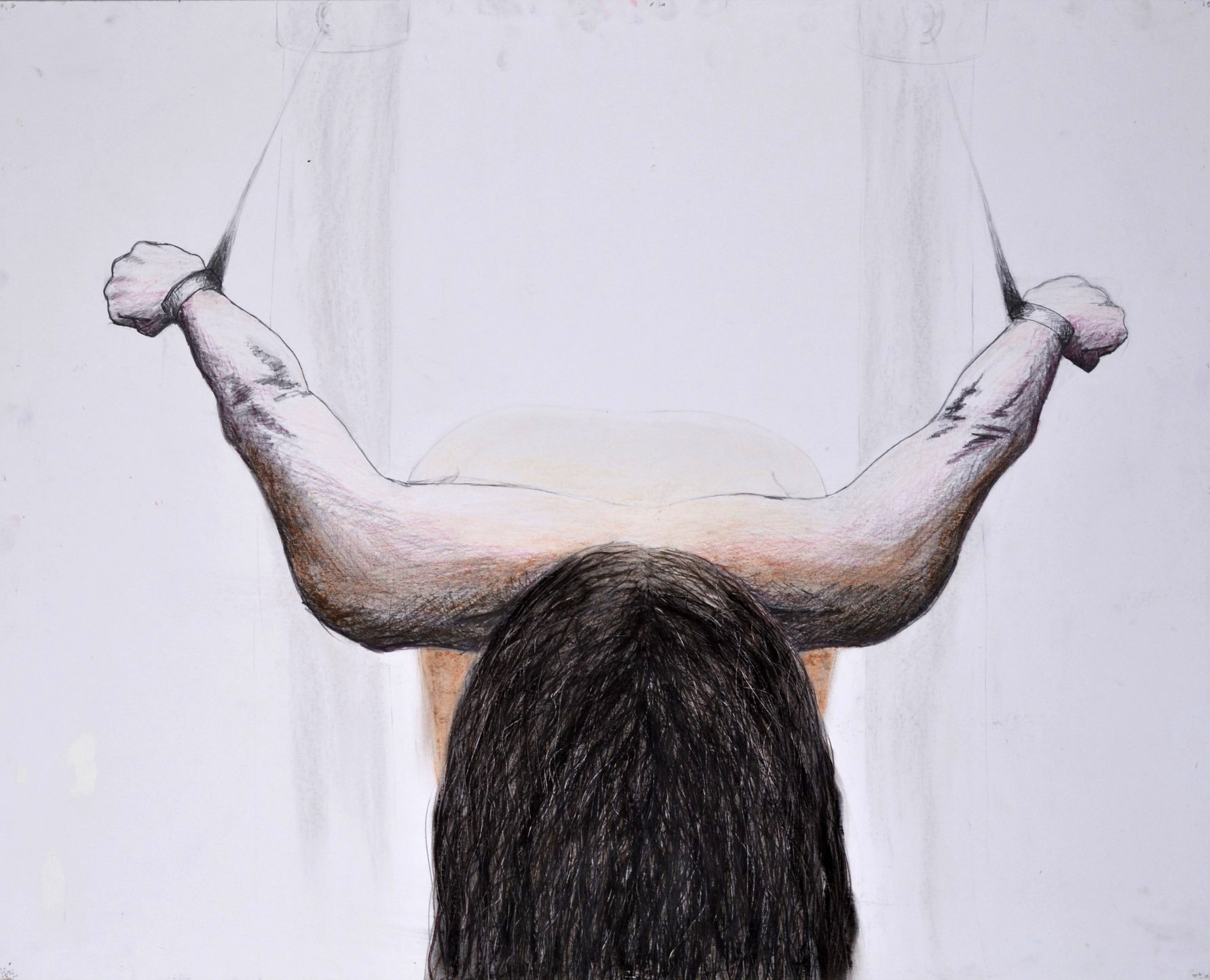 When Seth died, I was horribly torn up with thoughts of all I had done wrong. I don’t know how many times I’ve said “sorry” to him since then.

I look at my big sorrys, my little sorrys, and I acknowledge my faults. That’s a good thing to do—to own them. I say I’m sorry and I ask him to forgive me. Then maybe I can forgive myself.

Seth and I made an appointment with a psychiatrist, but we had to wait six weeks. I’m sorry I didn’t ask him, “Do you think you can make it that long?” A week before his appointment, he took his life. 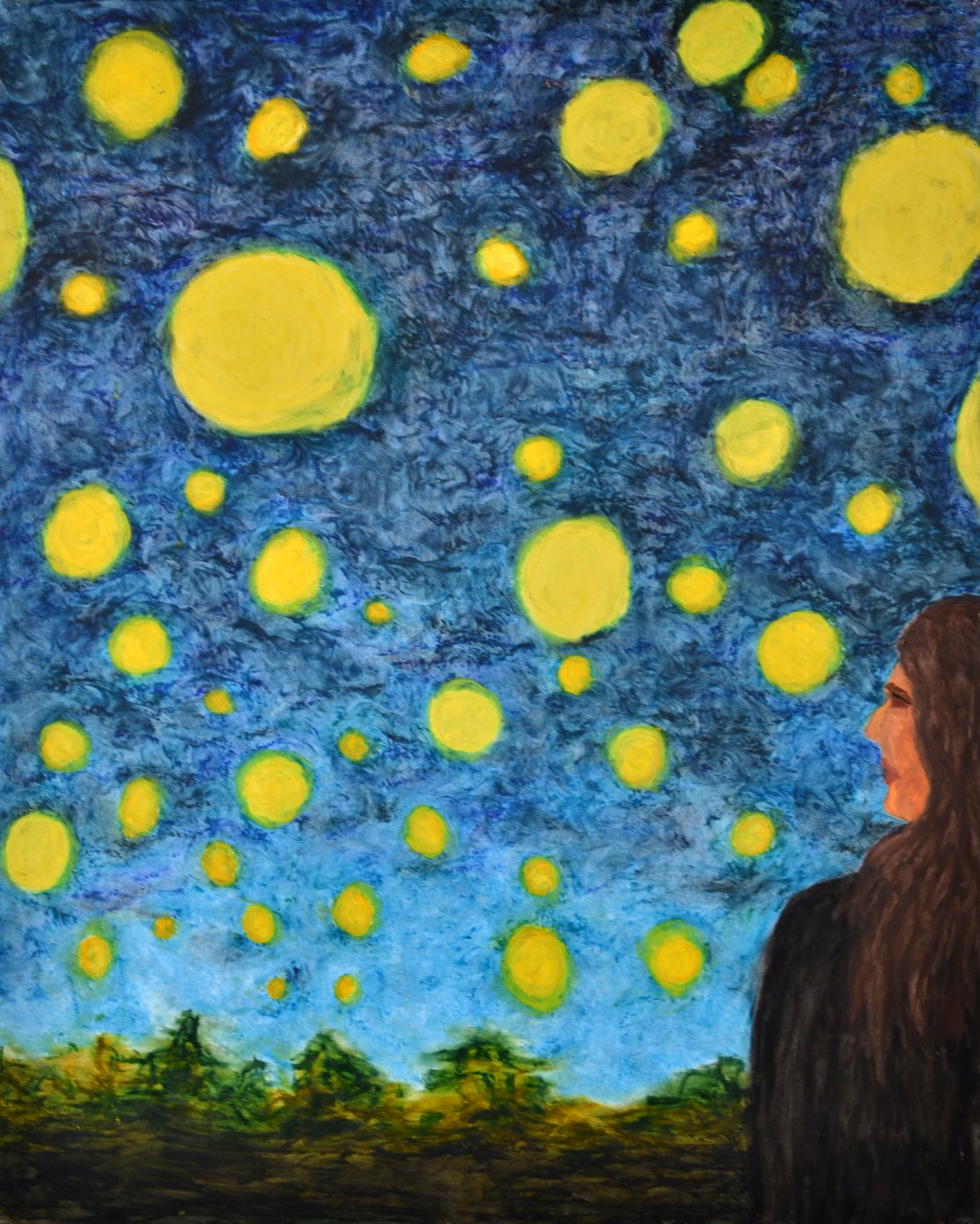 “Grief is my constant companion.
He follows me wherever I go.
He has his backpack, and he is ready to travel.”

I couldn’t shake him. He is with me. I’m resolved. Okay, this is what we got. I know you’re back there. You don’t surprise me. I know wherever I go; you’re going to be a few paces right behind me. 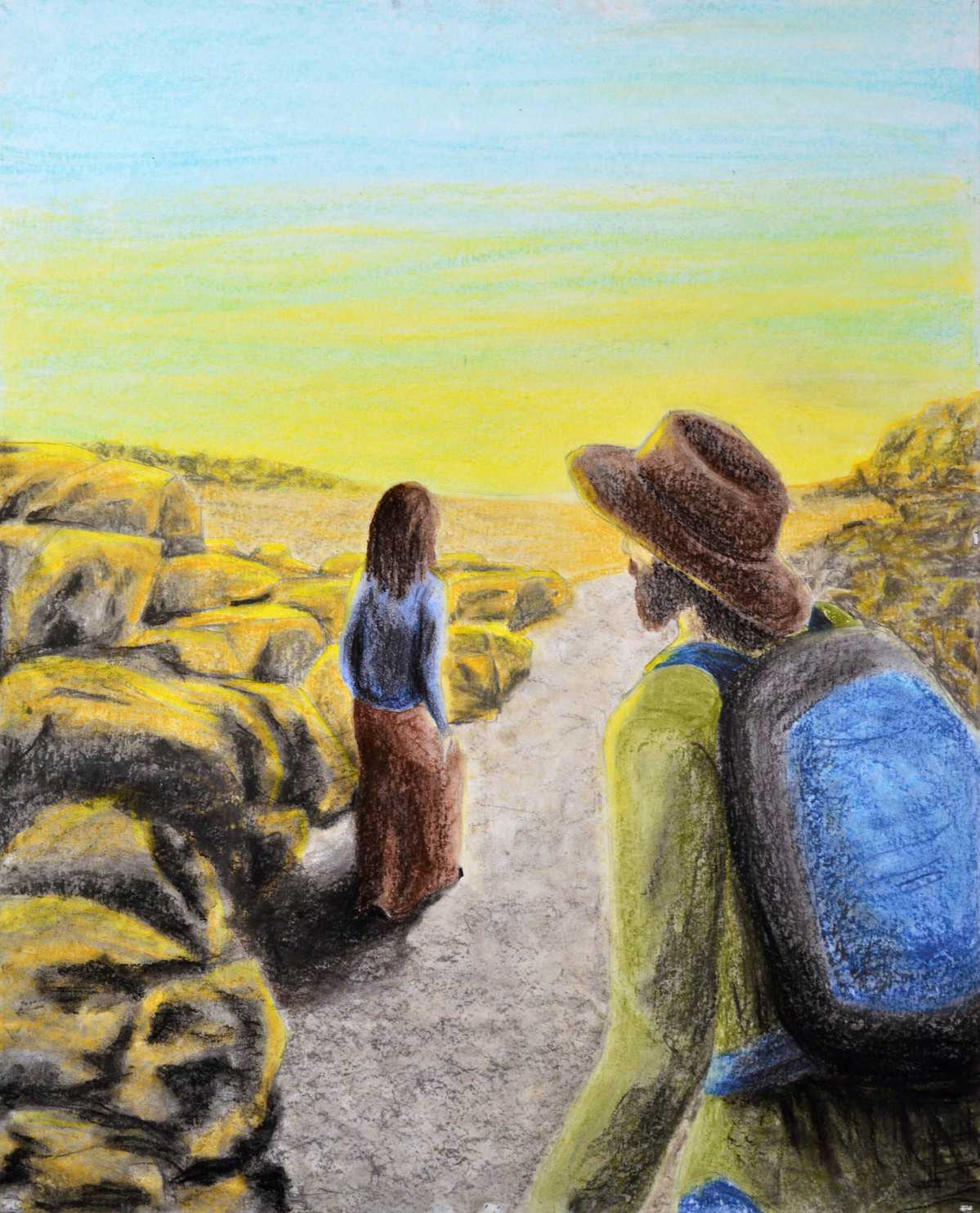 Embracing the truth about Seth and myself, his mental illness and suicide was a scary thing. I didn’t want to believe it or move forward in my life without him. That wasn’t my plan.

But I realized the world is turning, changing, and going on without me anyway.

You could say I was wading into the truth. It was here. I couldn’t ignore it. 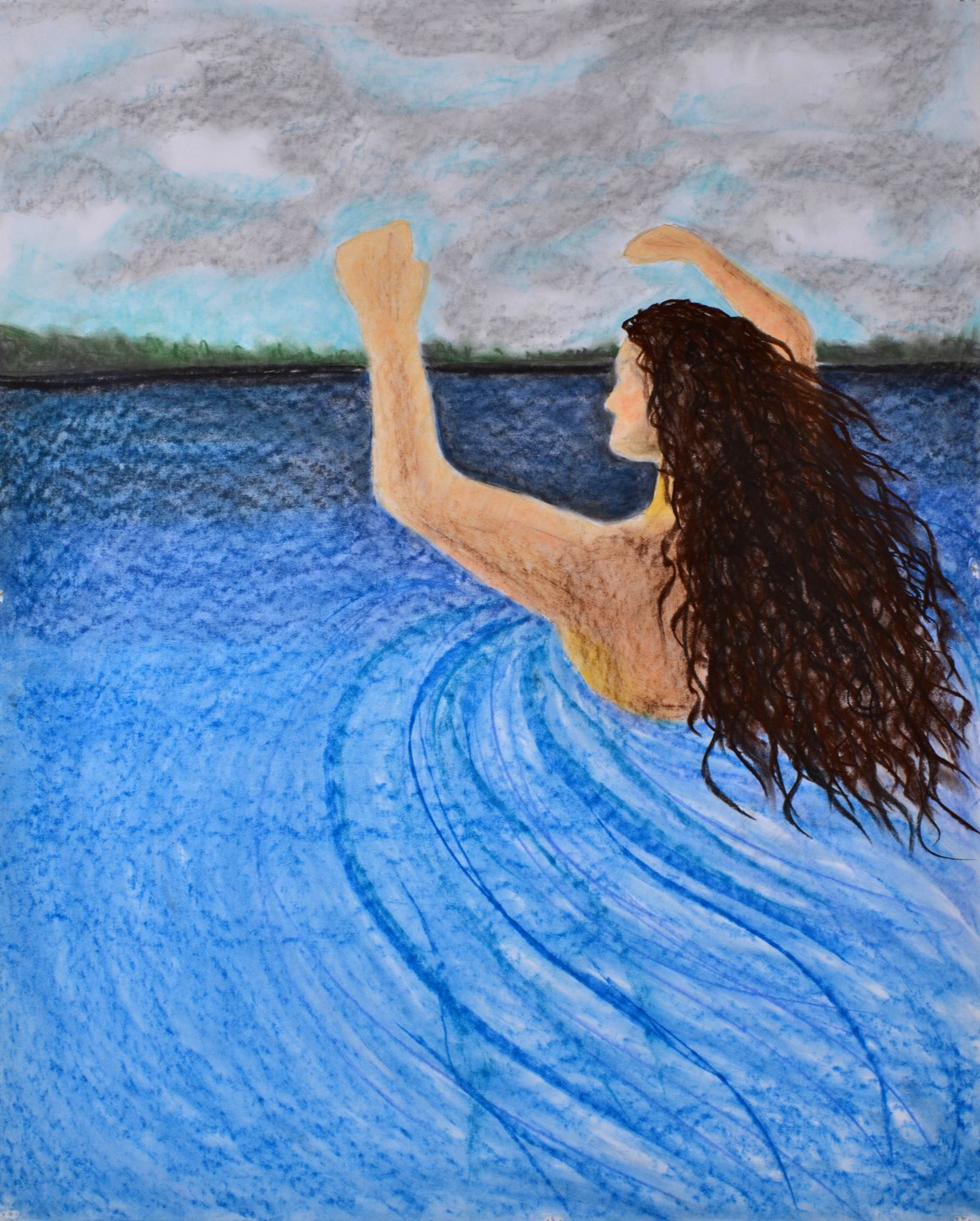 I have been on my horse when he sinks into muddy, boggy ground and I can feel his strength start as his muscles move to get us out. At times he panics, and I can feel that, too. I like the idea of the horse’s strength, of fighting against something.

I’m determined not to let my grief hold me back from my life anymore.

I’m fighting for my life. 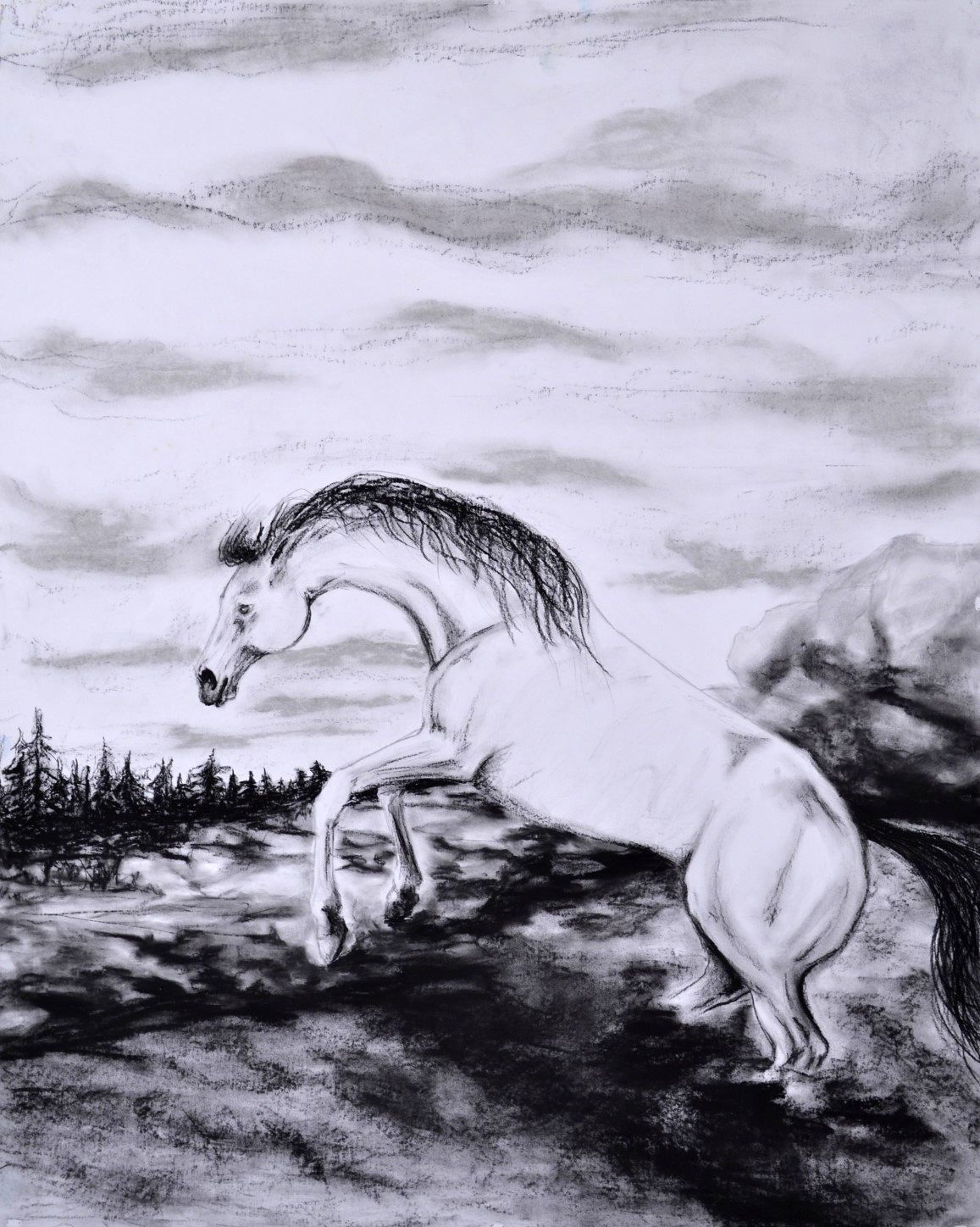 I’m looking across the fields. Seth is raising his hands, saying “Goodbye” to me. And, at that moment, I was at peace.

Goodbye, Seth. See you on the other side. 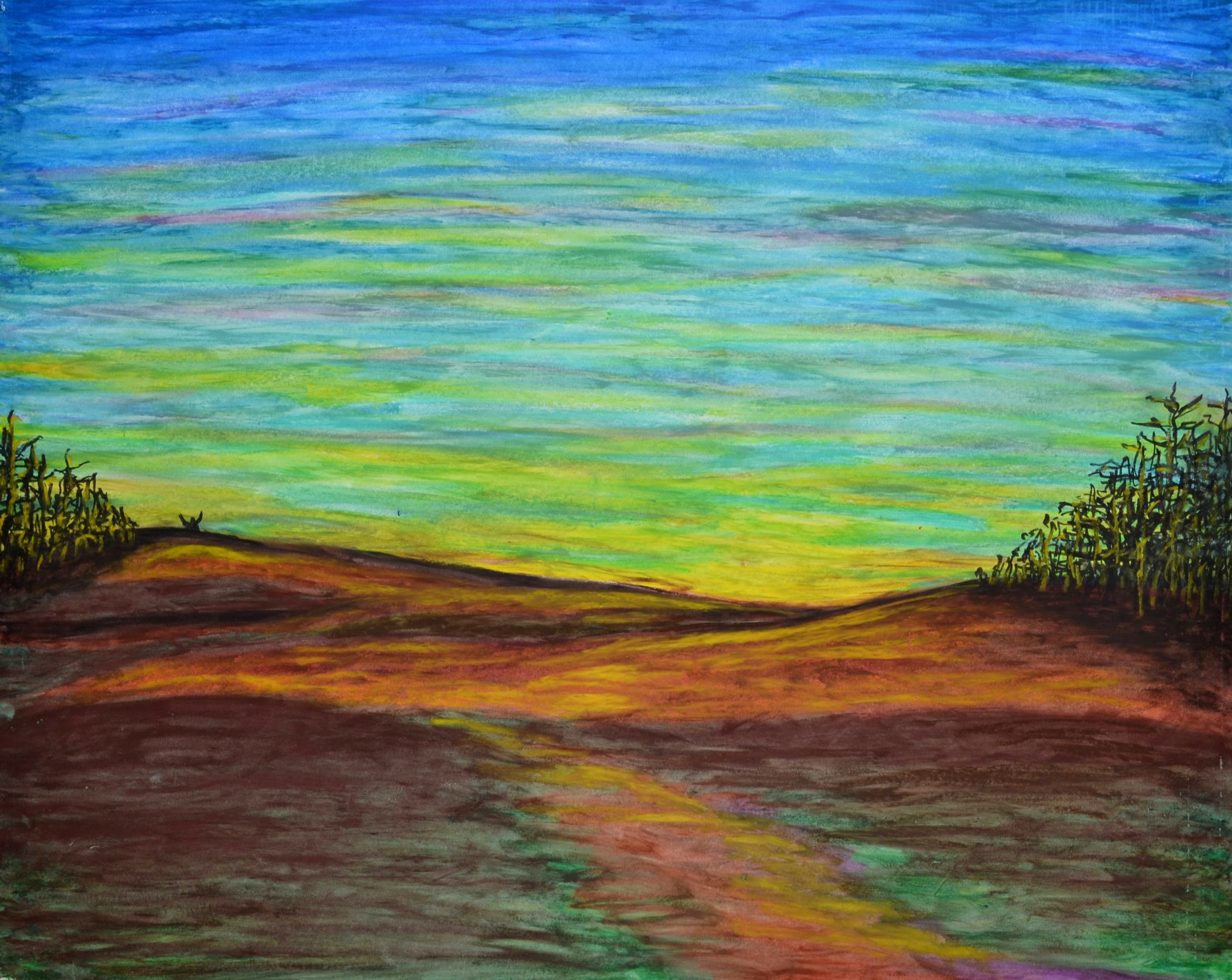 I had a revelation. I woke up one morning and heard God say to me, “You’re still trying to save him.” I burst into tears and went to the studio.

I’m in a boat. The sea is calm, blue skies, and not a wave is on the ocean. But I’m there, throwing out life preservers to nobody.

There is nobody to save anymore. 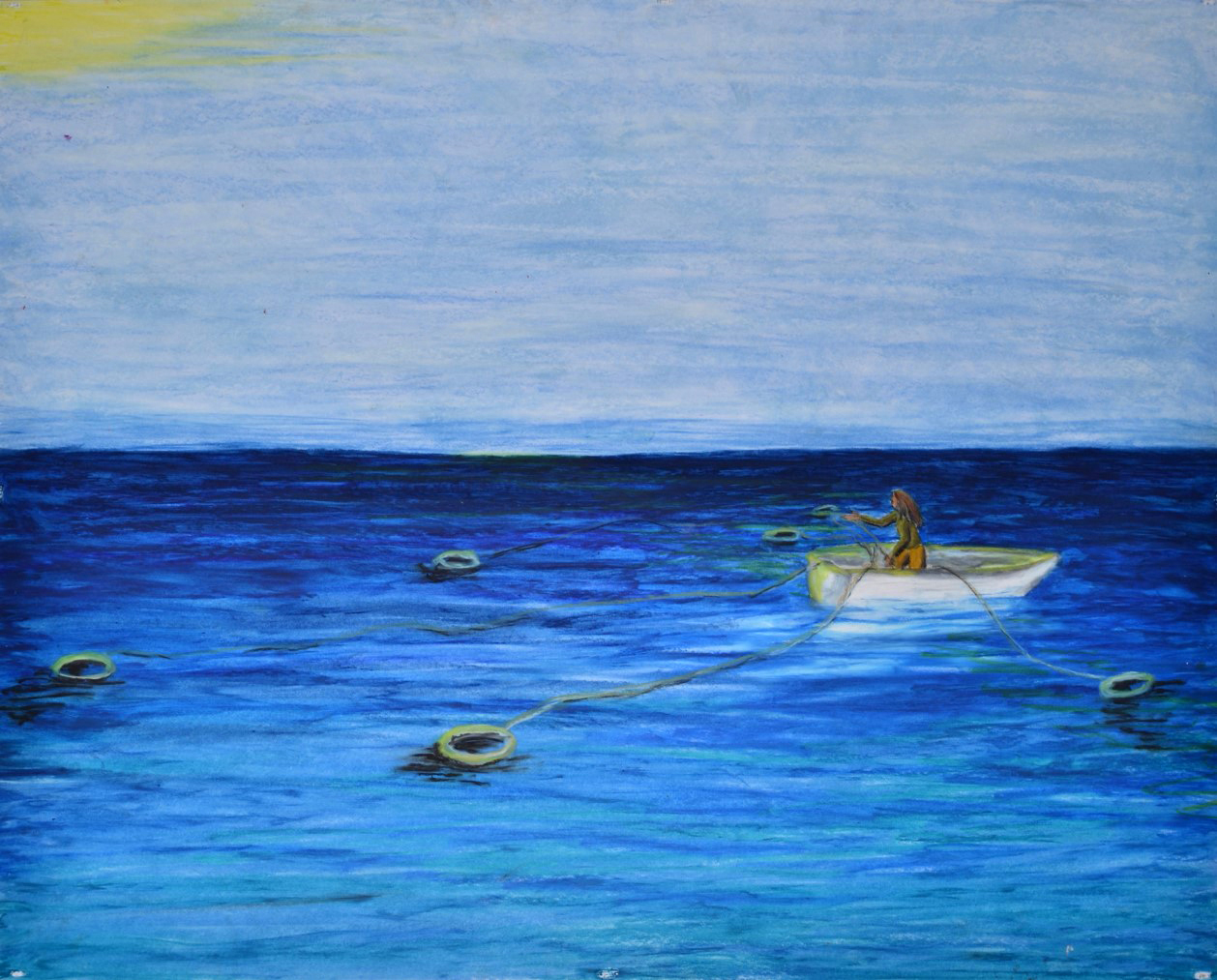 I’ve gathered up my life preservers. I’m on the shore looking out at the water. It’s a calm day again, and I’m at peace knowing I can’t bring Seth back.

I still love him. That isn’t ever going to change. Going on doesn’t mean I don’t love him anymore. I’m always going to love him. 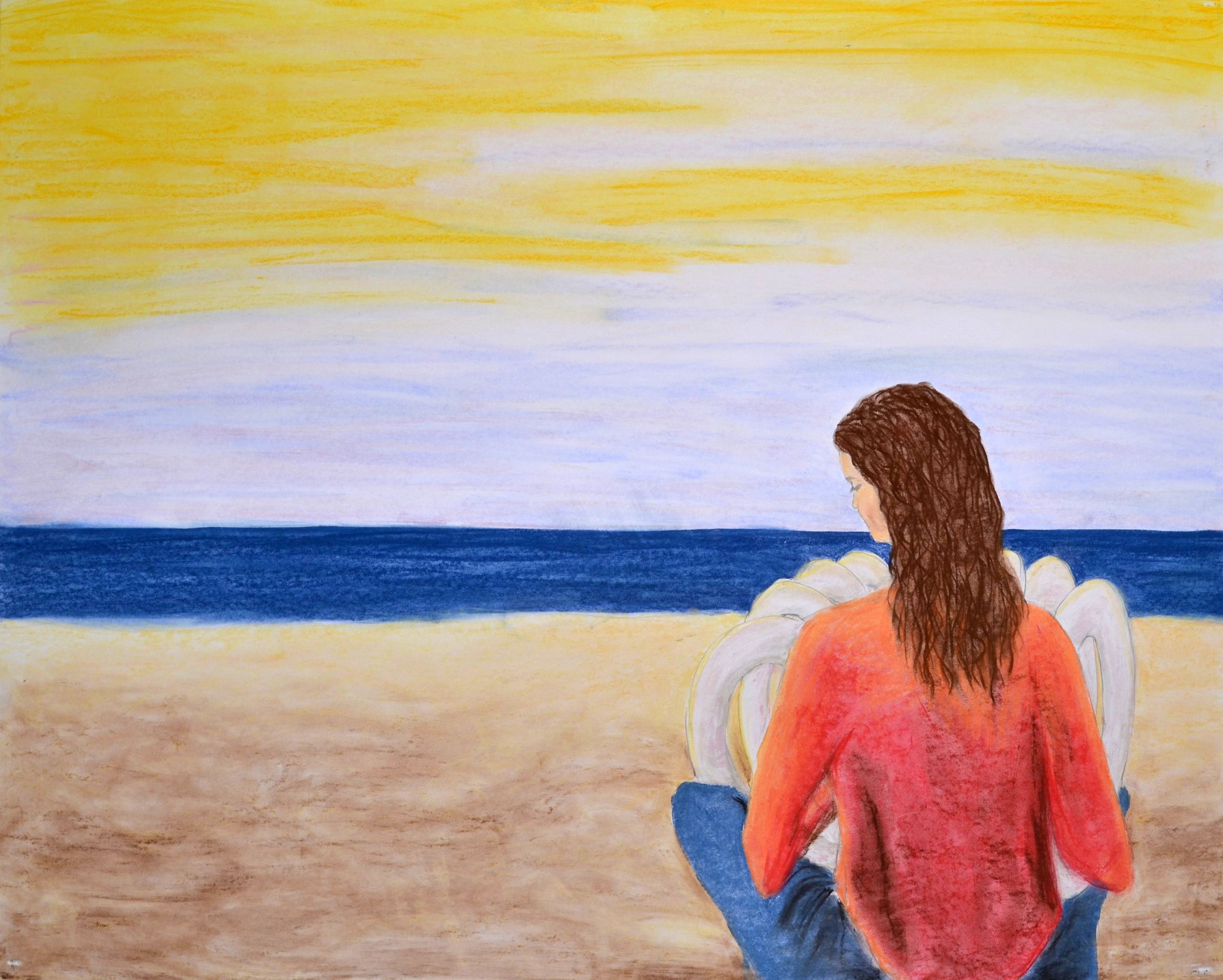 The experience of losing Seth caused me to struggle with my faith. I couldn’t understand it and kept questioning why God would allow this to happen.

But I had already lost the greatest thing on earth and I didn’t want to lose God, too. I hoped God would show me a way back to my foundation, my faith.

I can breathe now. 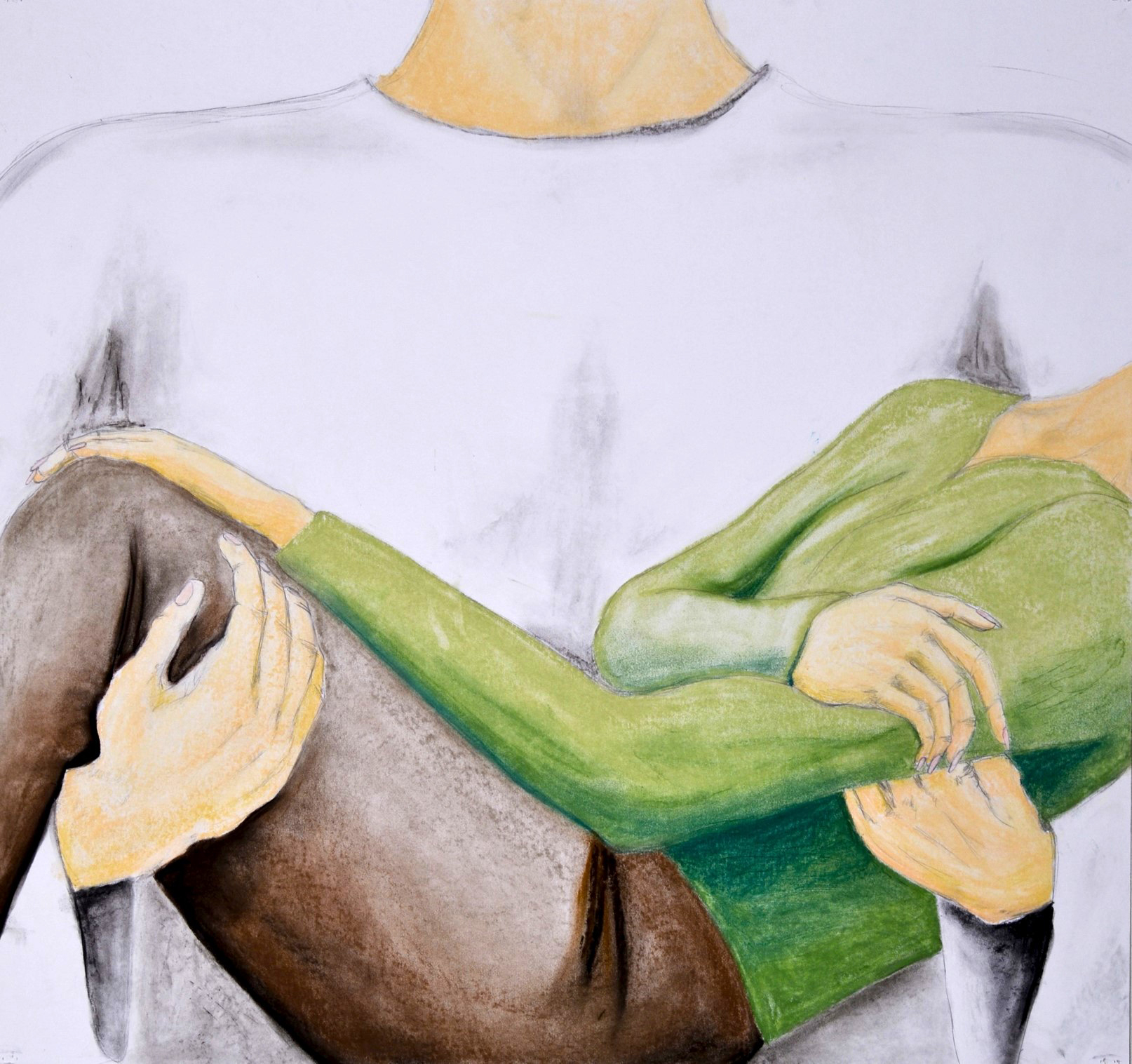 Seth was a wonderful kid, a wonderful person. It has been hard for me to grasp the reality of my life today without him.

The truth of what happened is something I had to allow in. For me, it was a gradual process of working with David and creating my artwork — letting my awareness about my life with Seth settle over me more and more with time. Because of my efforts, I can more fully accept what happened to Seth, his mental illness and his decision to take his life.

I went into my work with David determined not to get stuck in my grief, but to face the pain of Seth’s death as I could. Today when I look back at our lives together, I see not only Seth, but also myself, how wounded, confused, and battered I was by loving him through his illness and trying to give him his own choices.

Learning to forgive myself for the things I wish I had done to save him is my way of finding peace and coming to terms with the fact he is gone.

This is my way of beginning to live my life again.