My worst fear became a reality – not once, but three times. On April 28, 2005, my thirty-four year-old son, Shawn, died of a heart attack. He was my only natural-born child. Three weeks later, on May 19, my thirty-six year-old stepson, Tom, had a heart attack and died in his sleep. Two and a half years later, when I was working at the Art Counseling Studio and grieving the death of Shawn and Tom, on December 31, 2008, my thirty-two year-old stepson, Chad, had a reaction to a solvent he was working with in his garage, and died from acute respiratory distress syndrome.

Sixteen months ago, Shawn died, and I can still slip into some kind of fantasy world and not allow their deaths to happen – but I know I need to work at telling myself the truth. They died. 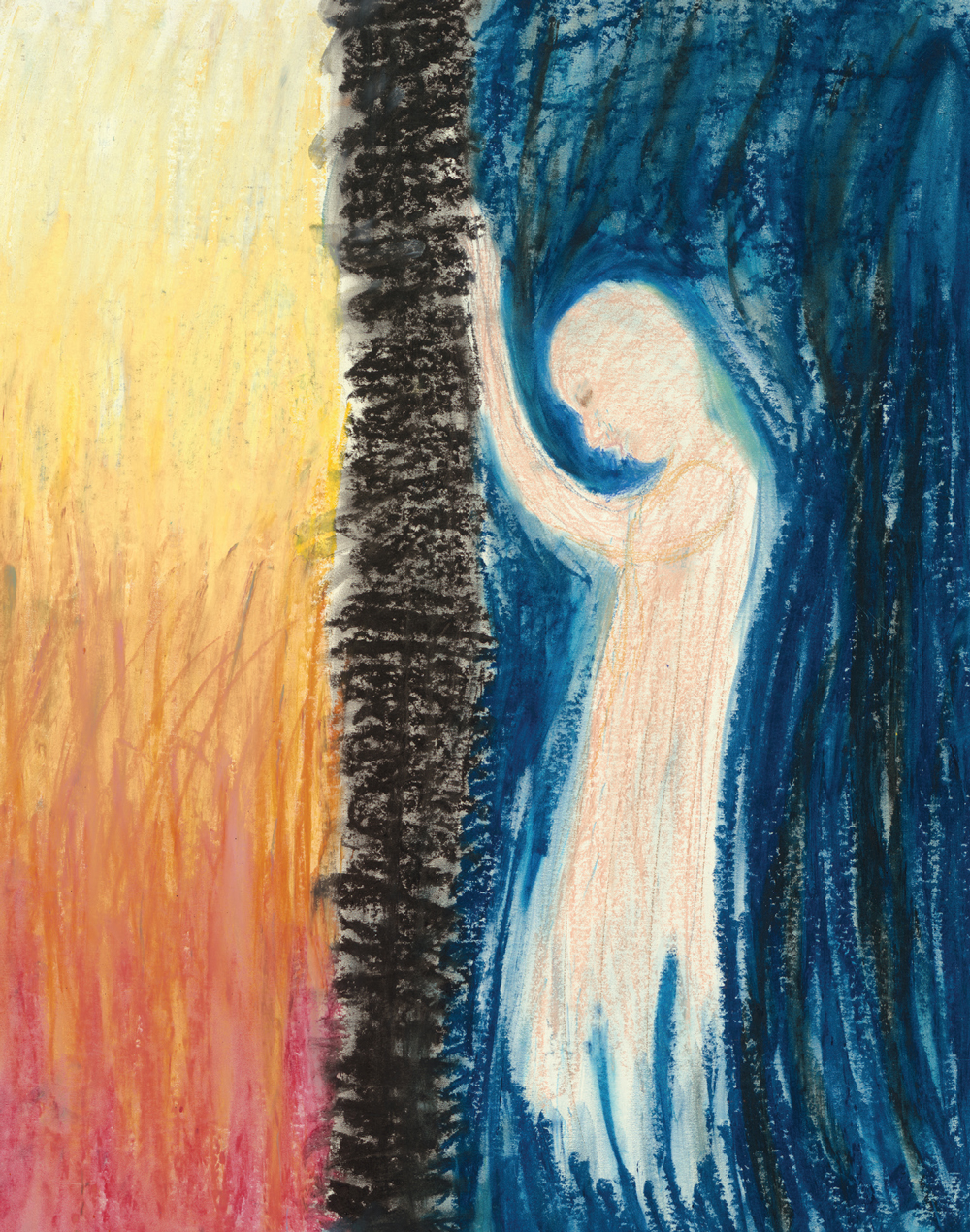 I need to support myself, console myself in my sadness and realize I am not less than because they died.

This is real. This is the pain of having my children die, but I am not rendered helpless. 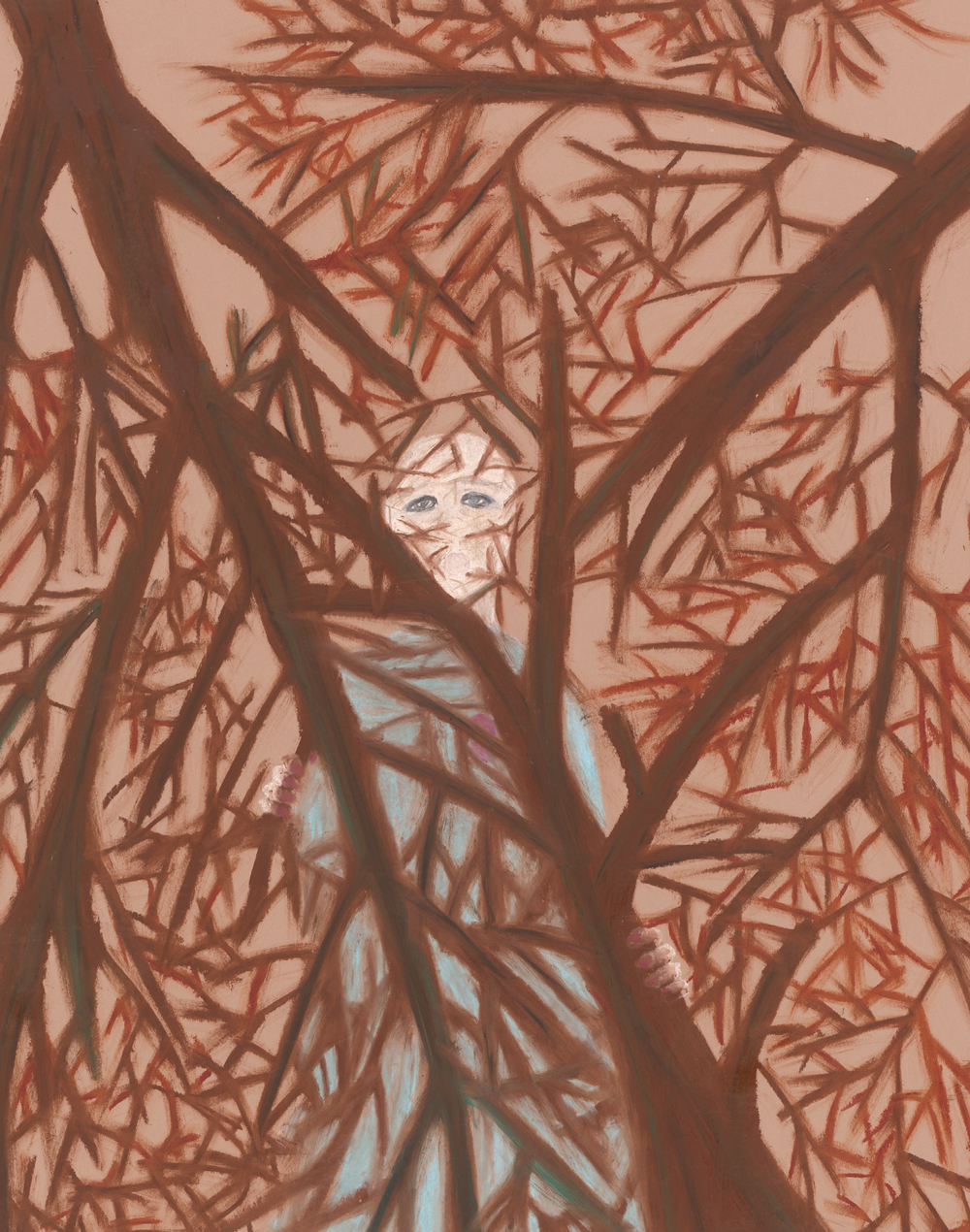 I’m out in the ocean bobbing, being battered around, waiting for the volcano underneath me to erupt. I create a raft for myself at the very last moment because I can’t swim.

The uncertainty of what the next minute, hour, or day holds for me is terrifying. How do I prepare myself to be strong enough to withstand the next thing? How do I not lose myself after their deaths?

Being a good mom was important to me and with two of my children gone, what do I do with my desire to nurture and contribute to their well-being? I know logically their deaths are not about me, but I feel like I’m being targeted and punished.

I don’t want to be a victim. If I don’t carve out time to work purposefully on myself, I won’t make it. 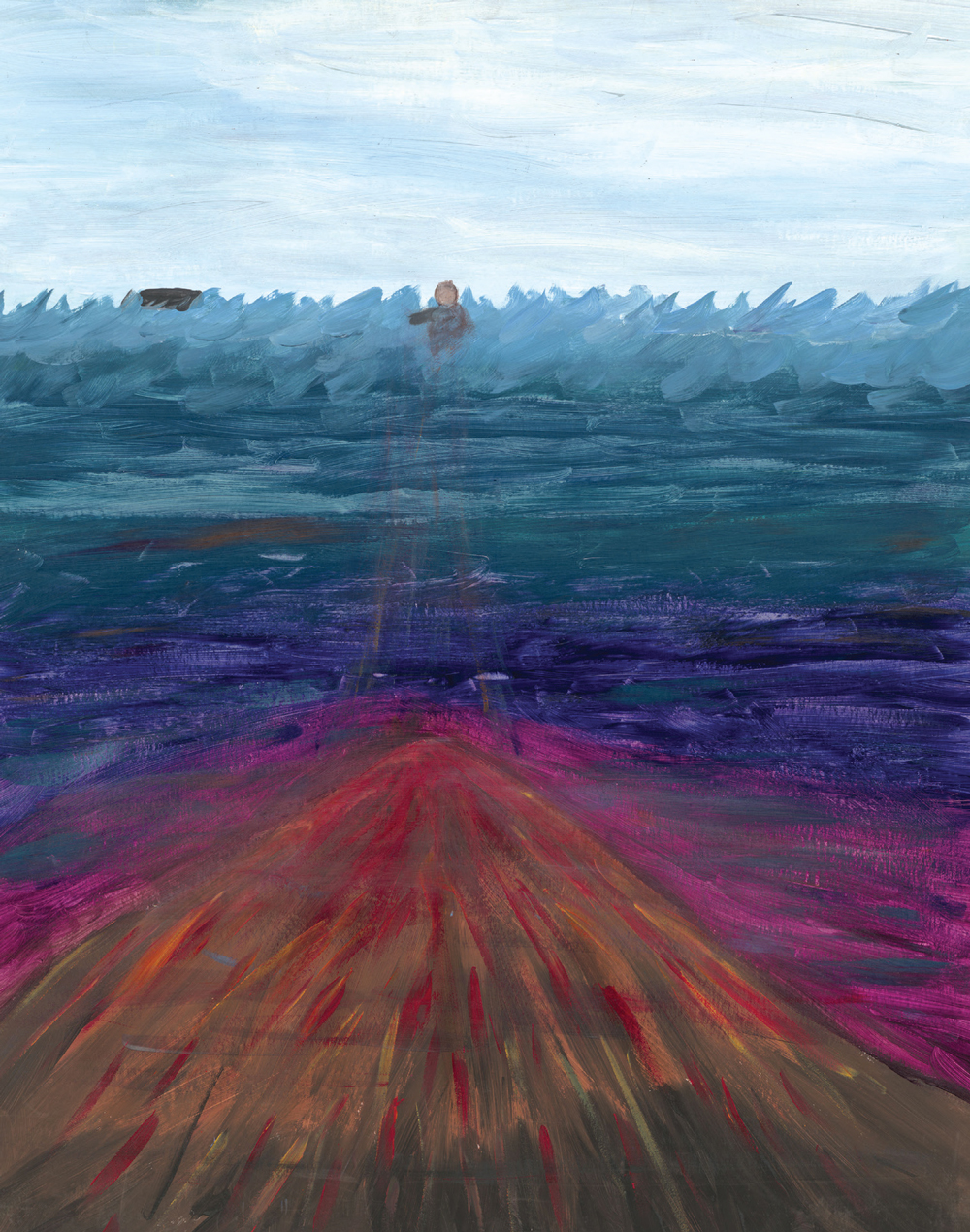 Chad died seven days ago! How can that be?

There’s so much chaos in my life and my brain and I desperately need to do my art – to put down, throw down, hurl down paint. I need to feel my art, to press my hands against it. I need to hear the sound of me hitting, attacking its surface – only then can I begin to get everything out that is pent up inside me, to create some order in my brain.

I started with a black hole in the middle of the painting and let loose – moving paint around and around, engaging my fear, my anxiety, my anger – getting it out, getting it out.

Hours later after finishing my work, I was exhausted and felt marginally sane. Only then, after painting, do I feel like I’m still here. 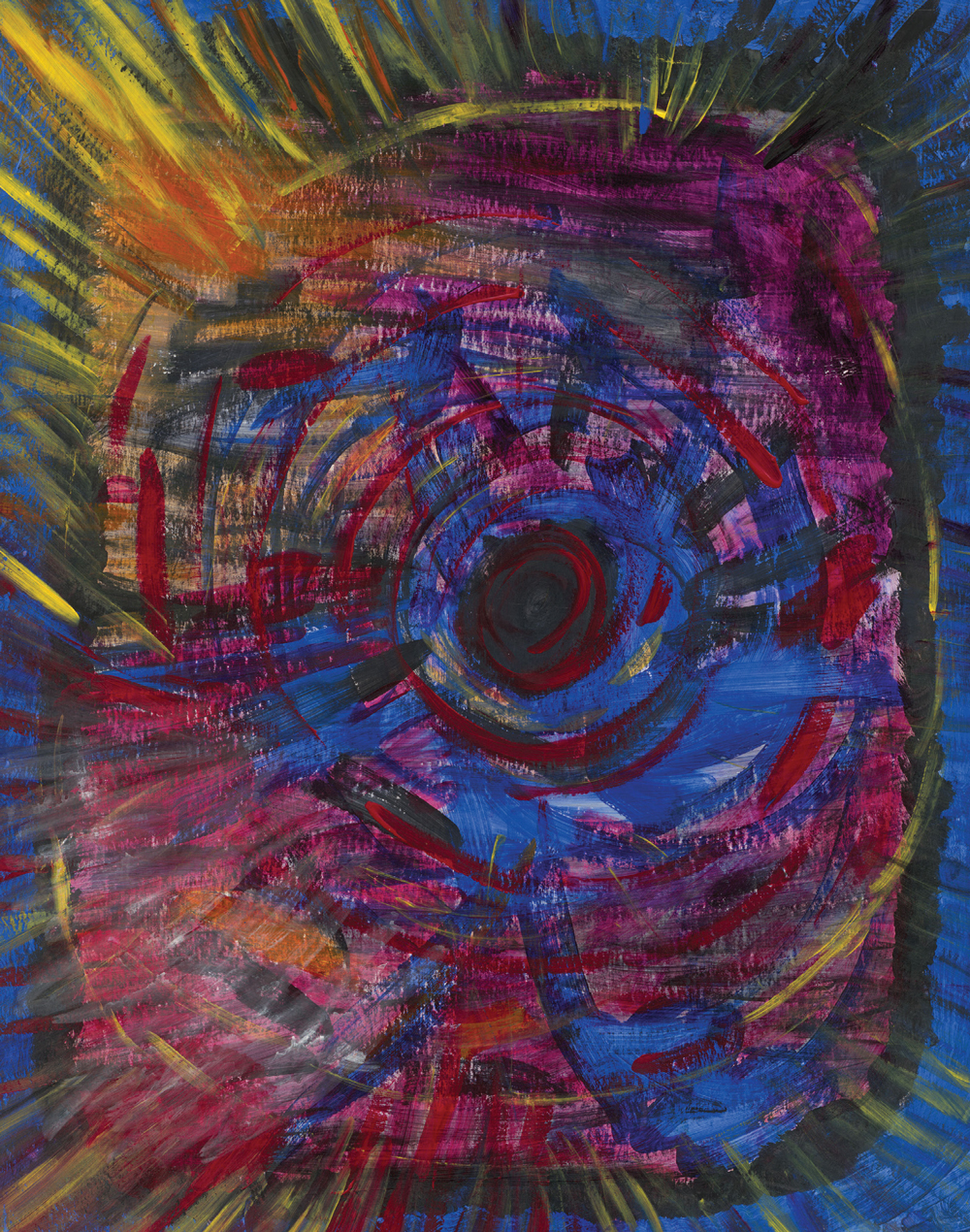 I’m buried alive and my heart could stop at any minute.

I’m battling my inadequacies, berating myself for not being good enough, for not saving my son, Chad. If I had been at the hospital emergency room when he arrived, I would have made certain, as a teacher of cardiovascular life support, that he got what he needed. But instead, he didn’t receive the proper care.

I feel responsible for what happened to him, as if I were God and had the power to save him, even though I wasn’t there. I can see the futility of this, but can’t stop myself from thinking and believing it.

I know I’m not as insignificant or powerless as I feel right now.

There’s goodness deep inside me, and even now, I’m putting energy out into the world for others. 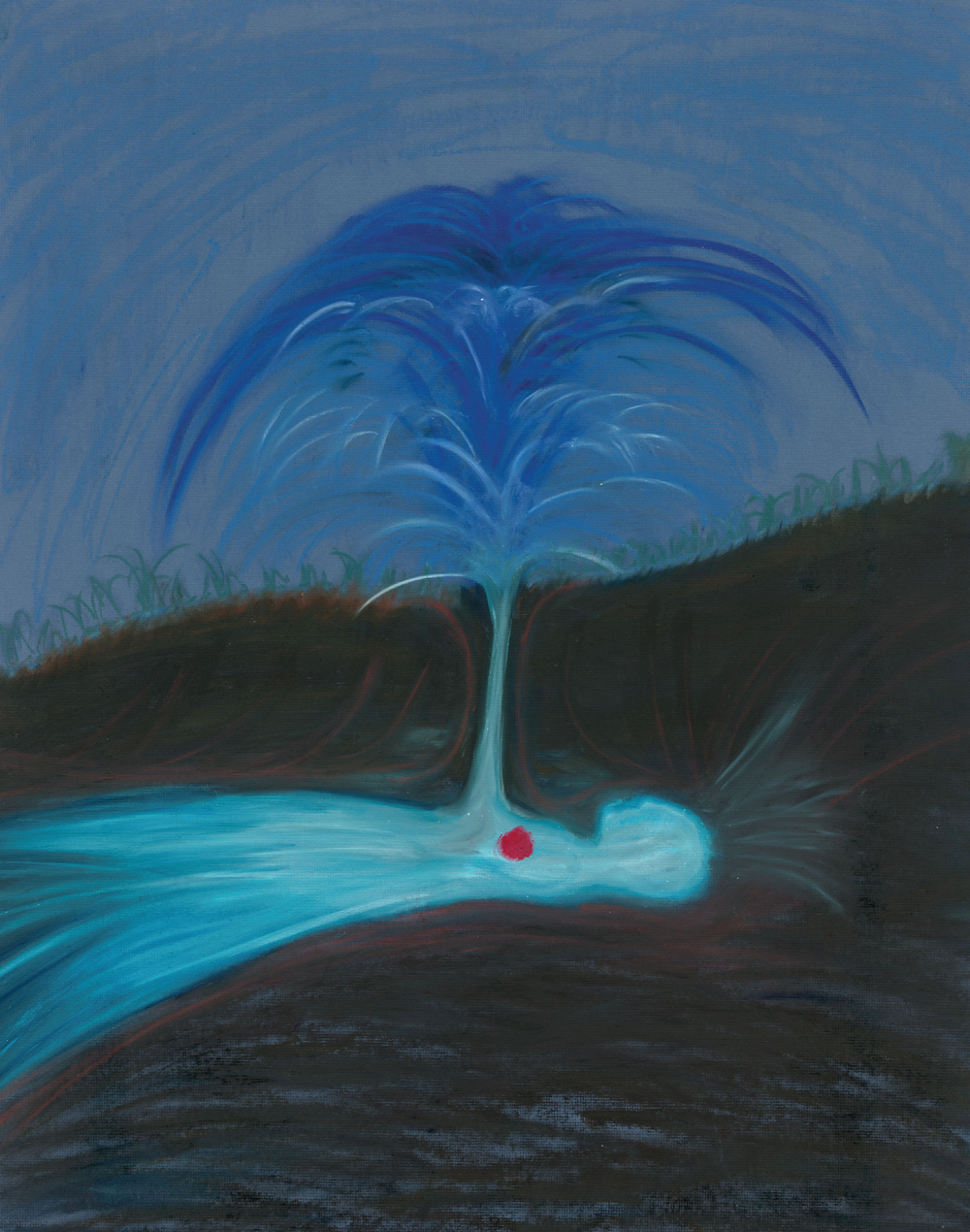 My thoughts are filled with the deaths of my children and I want to have my life back the way it was before. Embracing the truth is the biggest challenge of all.

I have pain and I have wounds, but there’s pink and healthy tissue inside me. I have to come to terms with the thoughts that are causing me to die in my own life. 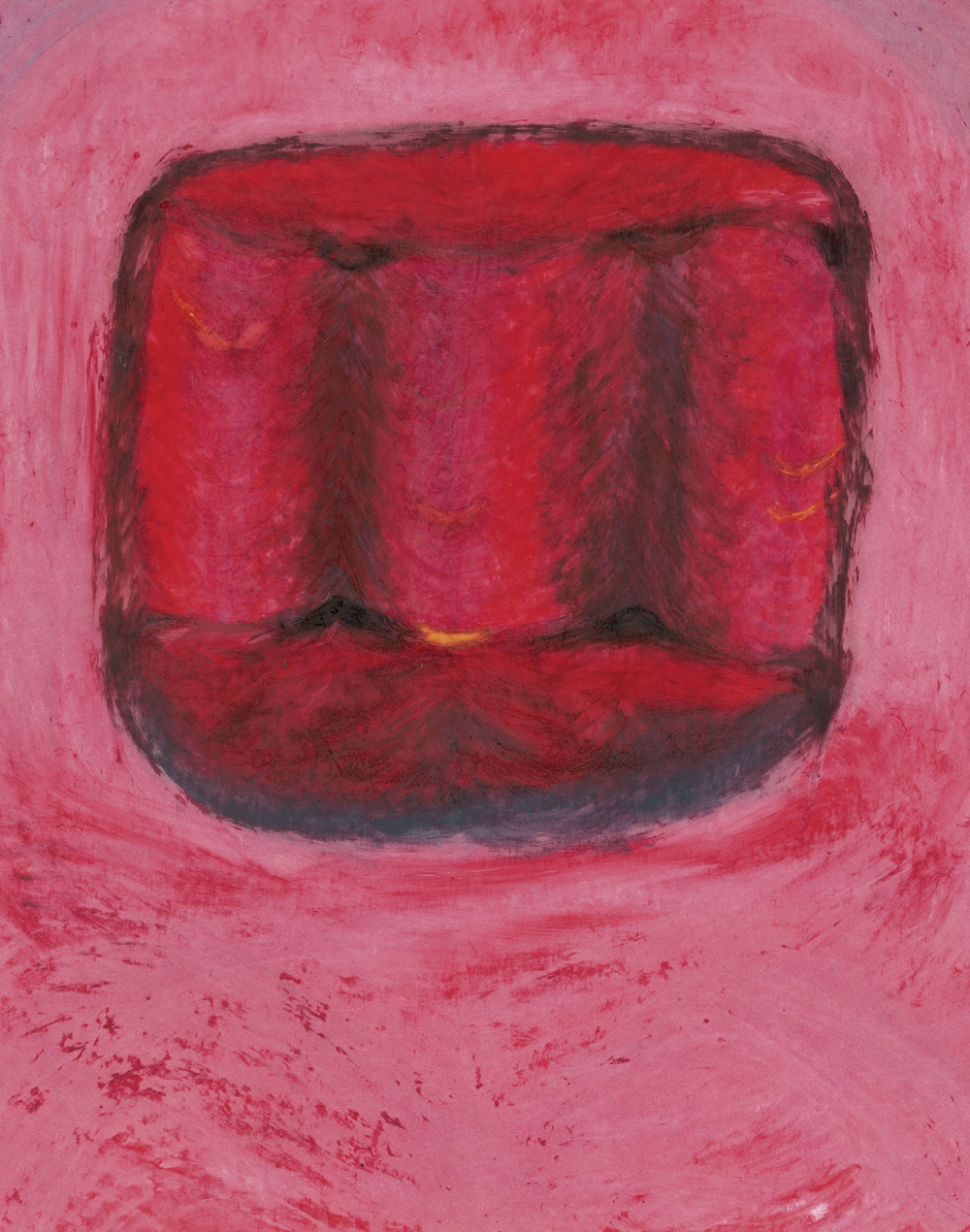 I’m lost in the story I’m telling myself about their deaths, that it wasn’t fair, that they died too soon, that mothers shouldn’t outlive their children, all the shoulds, the woulds, the wishful thinking, trying not to make their deaths happen. These thoughts are killing me because I believe them, like the bony specter of death coming to me in the night, saying, “If you had been a better mother, Valarie, they wouldn’t have died.” I know this is not true – it’s a lie.

I start my excavation project of digging and digging and finally getting to me buried under the dirt, and when I do, an explosion occurs and I experience new energy in life. I can’t allow the deaths of my sons to smother me anymore. I’m entitled to live, but I have to figure out how.

I don’t want to be captive to these thoughts anymore. I can grieve the loss of my children without losing myself, and it doesn’t have to be all that I am. 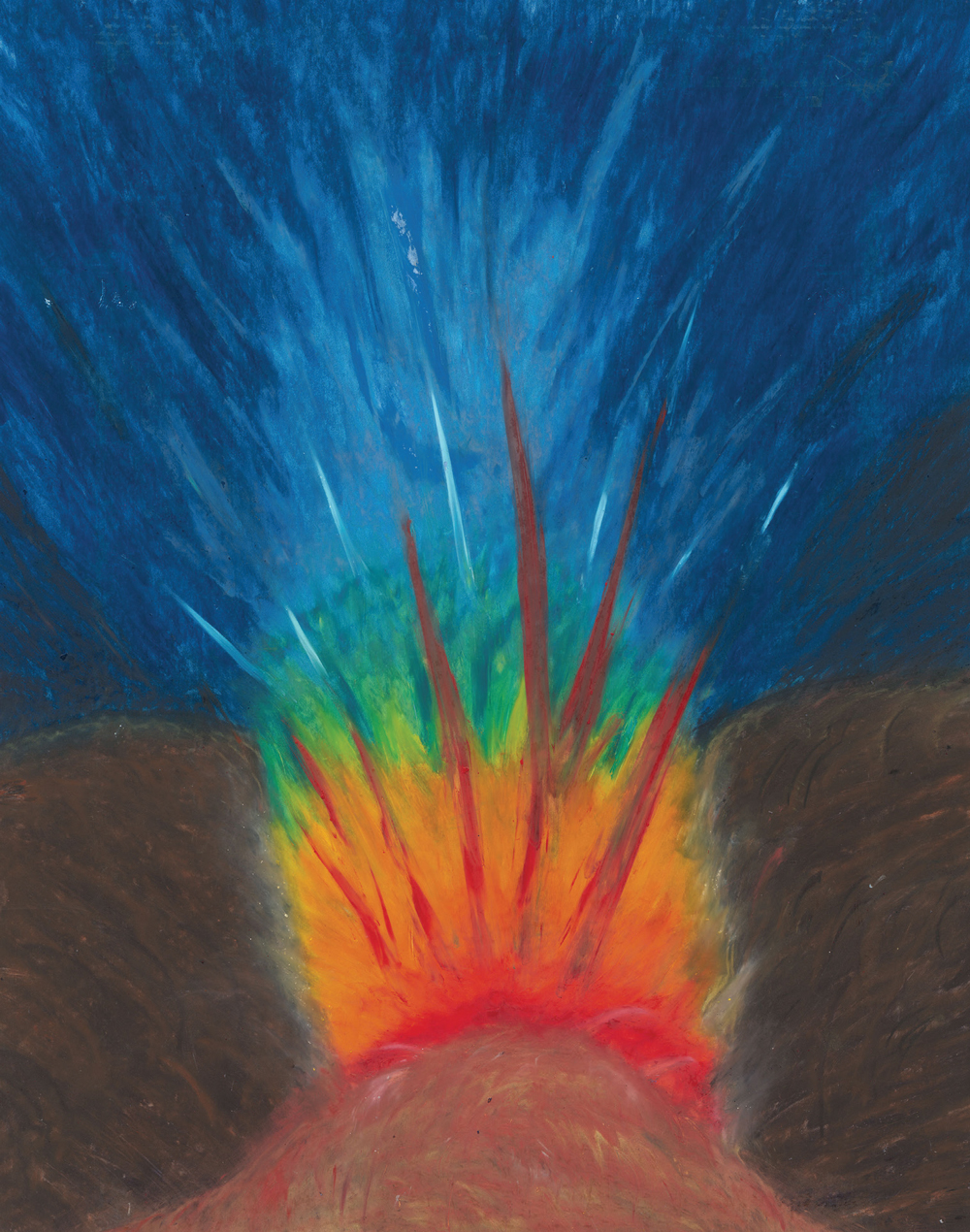 I start my painting with a blue shape and it turns into Shawn’s dying heart. The yellow slash, the words I spoke to him before he died, and the red, his blood, the life force leaving his body.

And now, do I continue to believe my conversation with him, just hours before he died, killed him? Did the extra stress I put on him when I talked to him about his financial responsibilities cause his heart attack?

I realize I don’t have to make his death about me anymore. I want to know what is real and what is not. I challenge my mind and the story I tell myself. 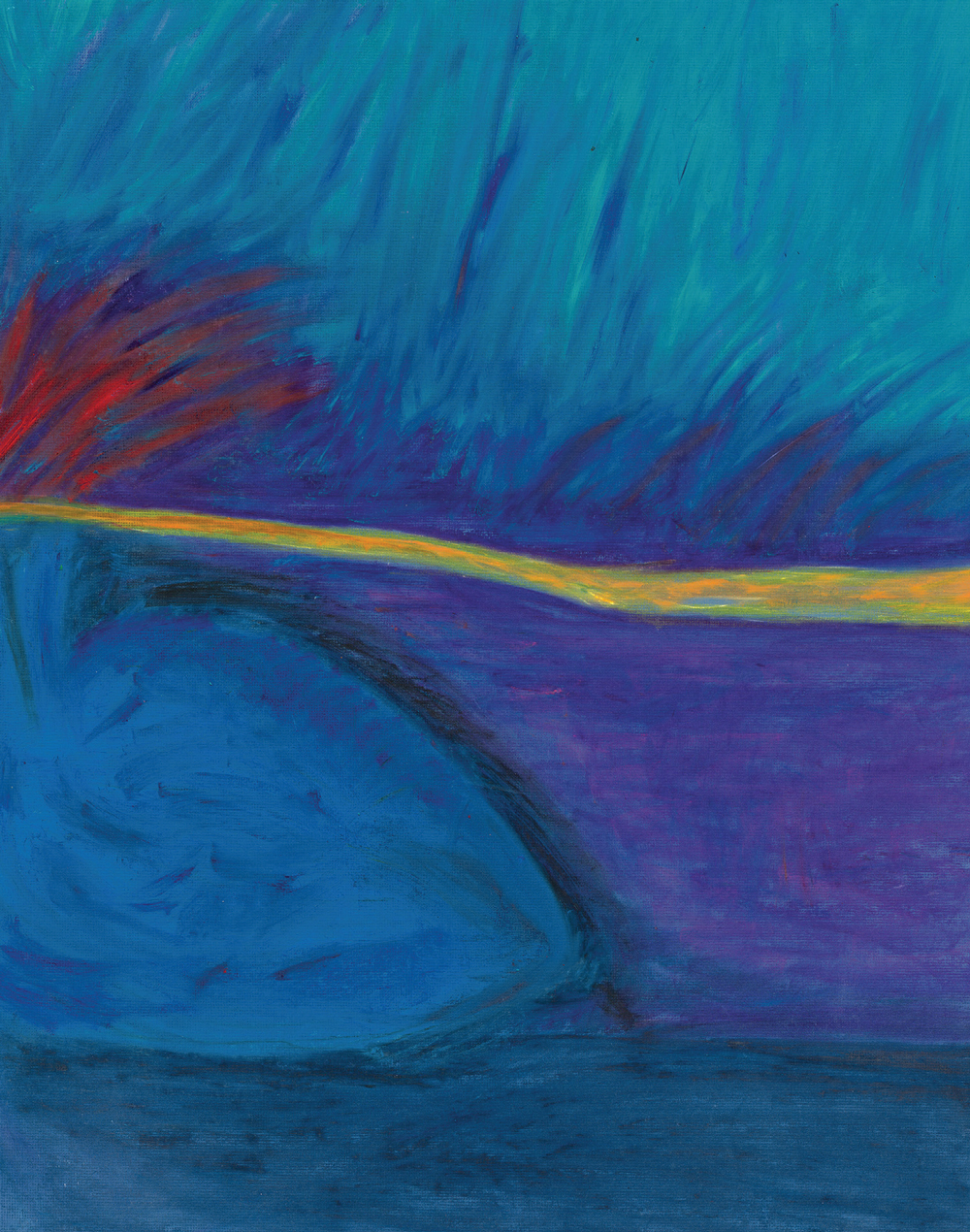 I’m lying across the precipice, bridging the gap between the two sides. I’m well-muscled – emotionally and spiritually strong inside – and able to withstand anything that may attack me from underneath. I don’t have to live my life afraid of what will happen next.

The three gouges on my head, symbols of three sons who died, are part of me. They’re part of my history and what makes me who I am – but their deaths don’t define me as a human being. 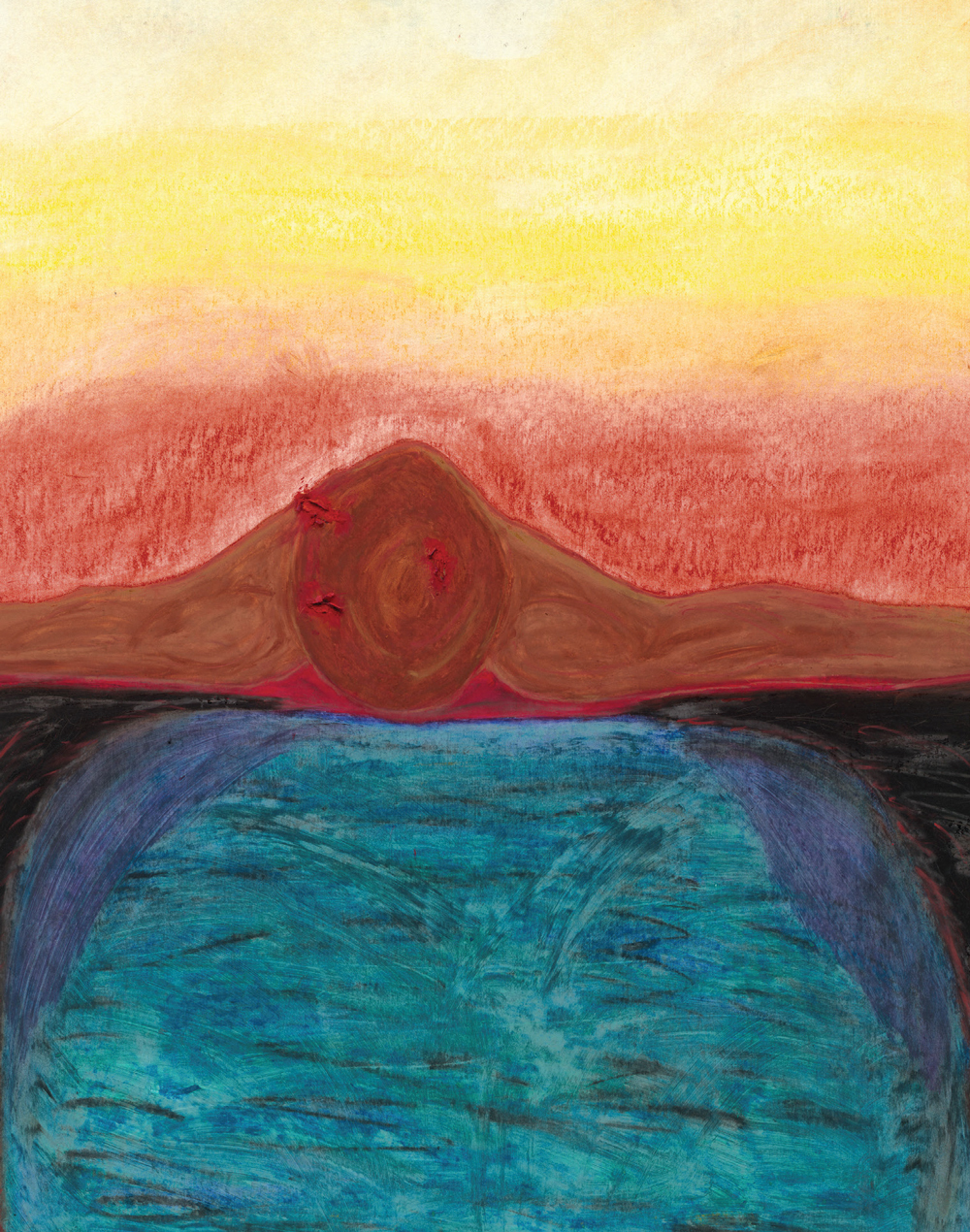 I’m rising out of my story of despair and hopelessness.

I’m more committed now, more than ever to reclaim who I am – to become all that I can be. Because I paid a huge price to get here. I refuse to wallow and disappear, to die in my own life.

Freedom for me is not denying the undisputable facts, the reality of my sons’ deaths. 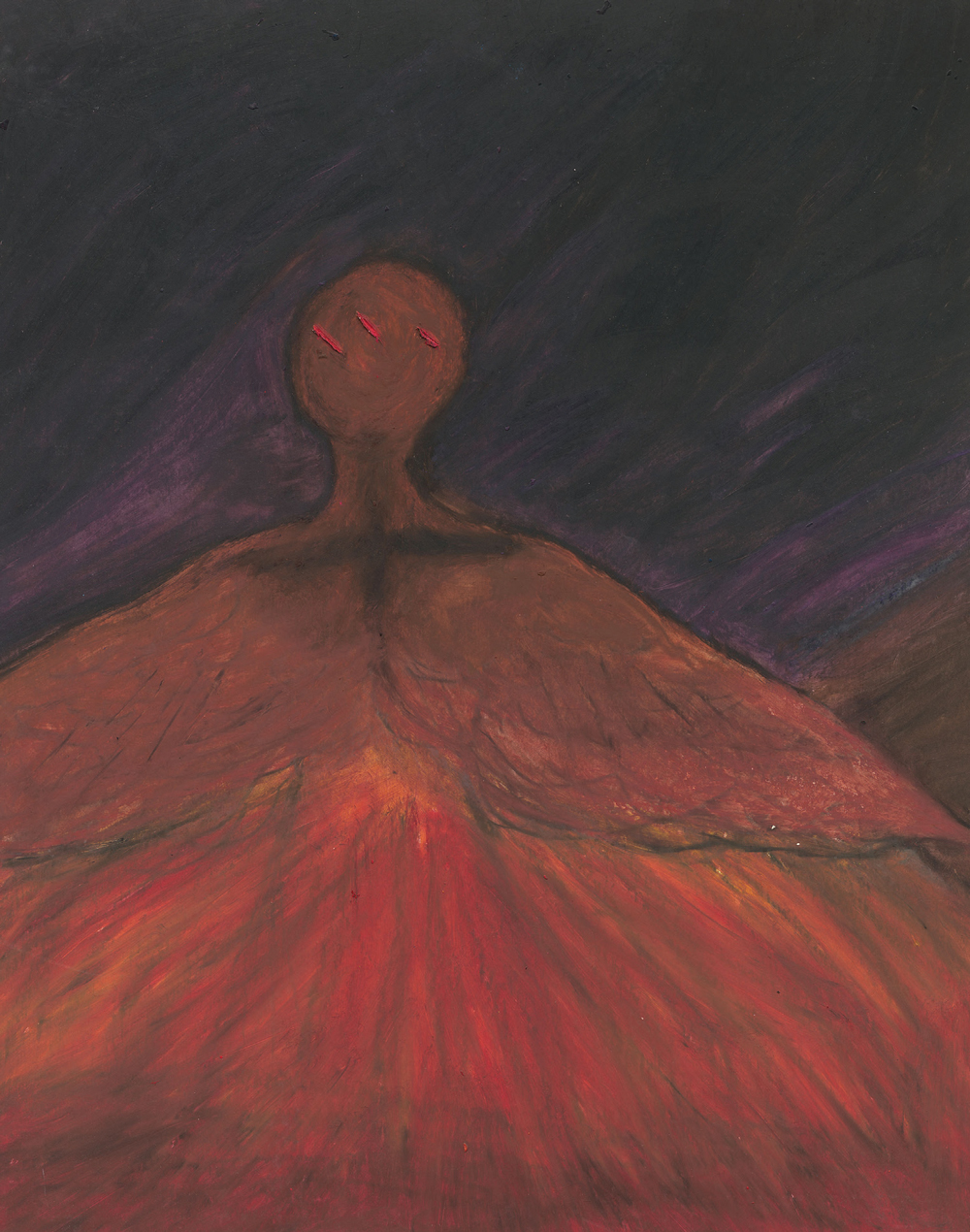 I stand within myself. The scars on my head and across my heart are the cumulative losses of my life since Shawn died. The streaks are the tears I’ve shed and will continue to shed for my sons.

In the midst of my pain, I’m strong and well defined in a way I’ve never been before. I’m excited because I matter, I matter more to myself than I ever have and I’m so thankful, thankful that I had the courage to focus on my life.

To bring honor to my sons who died, I will live the best life I can. 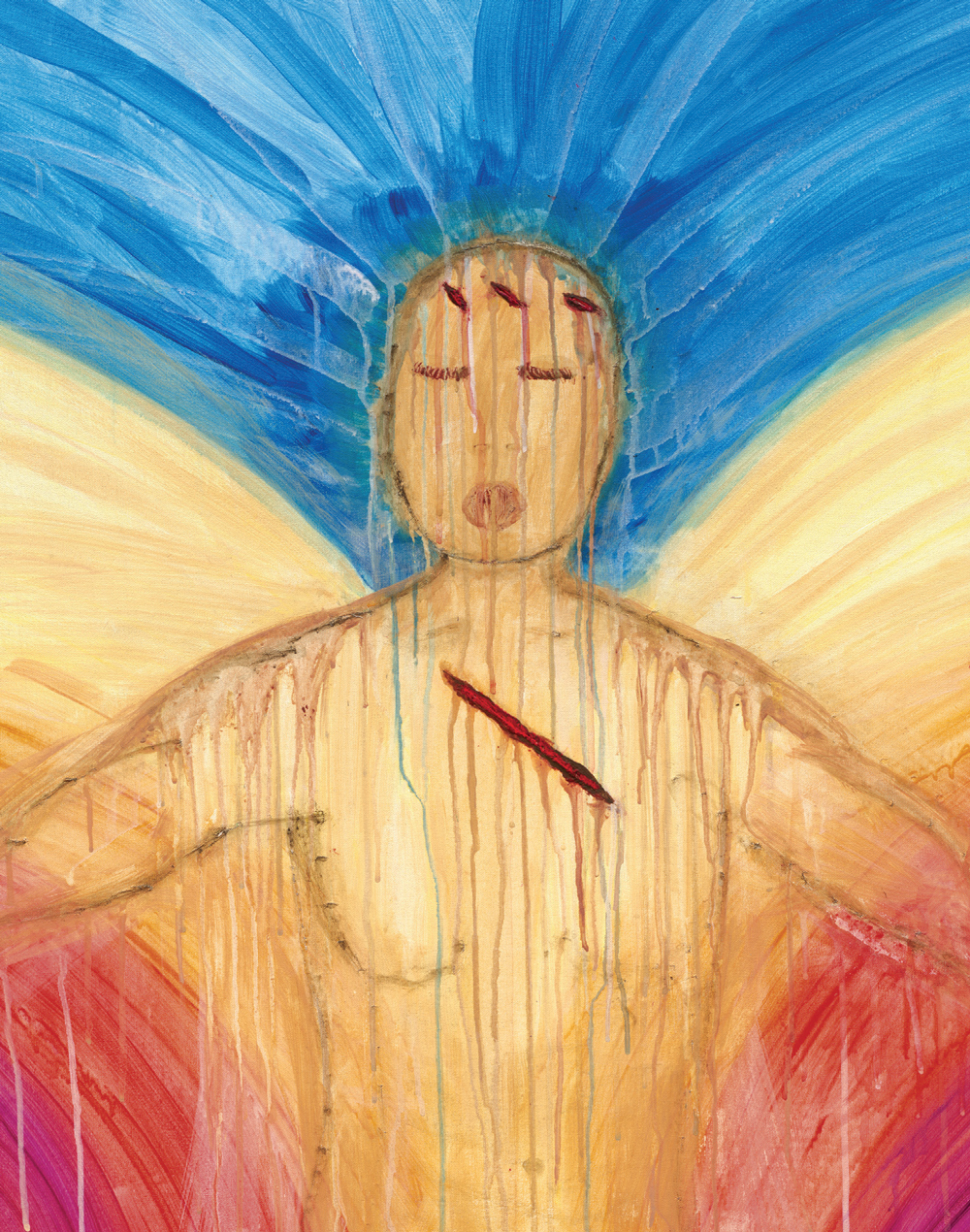 Now I know the truth – anything can happen – and it has in my life. But I can’t live in fear of what will happen next. If I do, I’m robbing myself of my life.

I long for my sons everyday, but it doesn’t keep me from functioning, from experiencing joy and happiness. They are part of me, and always will be part of me, but I am so much more than that.

I refuse to be a victim of my circumstances and to participate in my own disintegration by believing my life is less than – less significant to me because they died. If I died in my life, if I shriveled up to nothing, if I gave in to grief and allowed it to take over my entire life, what good would that do?